Caretaker Prime Minister Yingluck Shinawatra testified briefly before the National Anti-Corruption Commission (NACC) on Monday, launching her defence against charges of negligence of duty in relation to alleged corruption in the government's flagship rice pledging scheme. 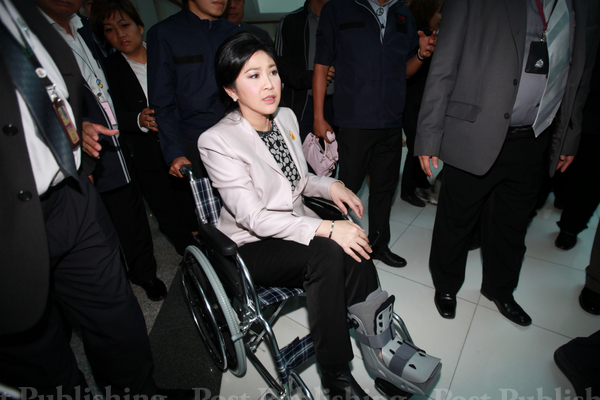 Caretaker Prime Minister Yingluck Shinawatra arrives in a  wheelchair at the National Anti-Corruption Commission on Monday to defend allegations of corruption in the rice pledging scheme. (Photo by Chanat Katanyu)

In a brief appearance, the caretaker prime minister submitted more than 200 pages of documents as evidence  to the NACC and said she was ready to supply more information if required, PM's secretary-general Suranand Vejjajiva said after the meeting.

Ms Yingluck was at the NACC main office at Sanam Bin Nam in Nonthaburi for no more than 20 minutes, and then left.

Mr Suranand said a written statement handed to the NACC in person by the prime minister  included 11 witnesses to be called and covered 13 issues.

The prime minister was ready to provide more evidence in her defence as needed, he added.

One of Ms Ykingluck's lawyers, Norawich Lalaeng, said she also briefly defended her self before the NACC in addition to the written statement, and insisted her intention was to see farmers benefit from the debt-ridden scheme and that it was transparent.

Ms Yingluck called on the NACC to question more witnesses, according to the lawyer. Three of them were her adviser Oran Chaiprawat, caretaker Labour Minister Chalerm Yubamrung and caretaker Deputy Commerce Minister Yanyong Puangrach, the lawyer added.

A cabinet source said some caretaker ministers opposed her decision to go to the NACC, citing that her fate had already been decided by the anti-graft agency. Ms Yingluck argued that her meeting was important to show that she respected the rule of law.

Ms Yingluck went to the NACC from the Office of the Permanent Secretary for Defence to further prepare her case with lawyers.

The prime minister faces allegations that as chair of the National Rice Policy Committee she failed to act aganst corruption in the rice buying scheme.