Caretaker Labour Minister Chalerm Yubamrung warned anti-government protesters on Wednesday of being further targeted by their rivals as police search for clues in a shocking attack on the expressway on Tuesday. 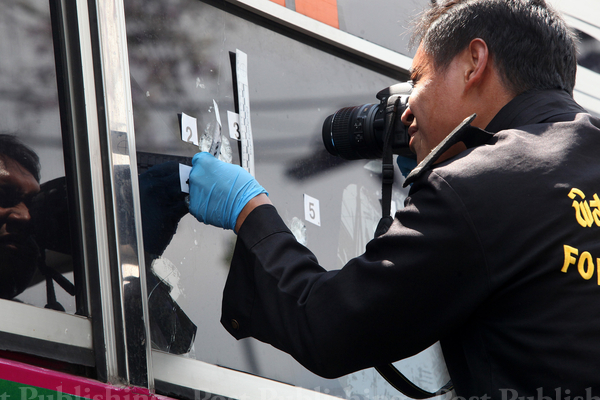 A forensic police collects evidence from a bus of the Network of Students and People for Reform of Thailand on Wednesday after it was attacked by unknown gunmen on Tuesday. (Photo by Thiti Wannamontha)

His warning came in the wake of the expressway ambush of protest vehicles in Nonthaburi, which killed one security guard and injured four people.

The protesters were returning from a rally at Government House to their stage at Chamai Maruchet bridge when unknown gunmen fired bullets at their convoy. The dead man was Sgt Wasant Khamwong, a security guard for the Network of Students and People for the Reform of Thailand (NSPRT).

Police Wednesday continued to collect evidence from the bus and lorry shot at by the attackers and at the location on the elevated road where the ambush took place. Investigators have contacted the Expressway Authority of Thailand to examine security camera footage of the incident. 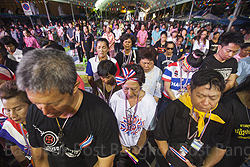 Pol Maj Gen Thawatchai Mekprasertkul, chief of the Forensic Science Police Office, was convinced that the gunmen used rifles in the ambush.

Army chief Gen Prayuth Chan-ocha appealed to the NSPRT not to take revenge for the attack as it could exacerbate the political tension marred by months-long rallies to oust caretaker Prime Minister Yingluck Shinawatra.

They suspected two red-shirt members, including Wuthipong Kachathamkul, or Ko Tee, to be the masterminds behind the attack.

NSPRT spokesman Amorn Amornrattananon warned that there should be no more killings as another death would be avenged by the loss of 10 lives of the group's opponents.

United Front for Democracy against Dictatorship (UDD) leader Jatuporn Promphan on Wednesday denied involvement in the ambush and distanced the movement from a faction led by Mr Wuthipong, who leads red-shirt members in Pathum Thani.

"Ko Tee has declared himself a rebellious red-shirt. He never follows the directions of UDD leaders," he said.

The body of Sgt Wasant was moved from Ramathibodi Hospital to Wat Somanas for a chanting ceremony.

Mr Chalerm, the Centre for the Administration of Peace and Order chief, said the mobile rallying tactics being used by the PDRC and NSPRT made them easy targets.

Anti-government protesters had made many enemies by staging rallies at government agencies and demonstrating that they were above the law.

"Don't think that nobody hates you. We [the government] don't because that would get us in trouble. But the way the NSPRT and the PDRC have harassed other agencies has made people angry,'' said Mr Chalerm.

Gunmen open fire on a group of anti-government protesters driving away from a Bangkok rally, killing one and wounding four. Reuters video.