Army: Arresting Suthep 'not our job'

If People's Democratic Reform Committee (PDRC) secretary-general Suthep Thaugsuban's plan to "reclaim sovereign power" is illegal it is the government's duty to take legal action against him, not the army's, Gen Prayuth Chan-ocha said on Wednesday. 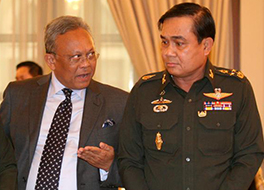 "We'll have to look into the law to see if (reclaiming sovereign power) can be done.

"If it's against the law or inappropriate the Centre for Maintaining Peace and Order (CMPO) can arrest the wrongdoers along with those who commit lese majeste and who want to separate Thailand," the national army chief told reporters.

He insisted the armed forces do not side with either Mr Suthep's group or the pro-government group led by United Front for Democracy against Dictatorship (UDD) chairman Jatuporn Prompan.

If either side violated the law then the CMPO and police were duty bound to make the arrest, not the military.

Gen Prayuth said he did not want people to accuse the military of interfering in all issues.

"The military has no authority to arrest anyone. If you can't arrest Mr Suthep, then don't tell us to do the job for you. that's not right," he added.

On Tuesday night,  Mr Suthep announced at the Lumpini stage that the PDRC would reclaim sovereign power for the people as soon as "Yingluck Shinawatra's status as caretaker prime minister is terminated by the Constitutional Court".

"If Ms Yingluck refuses to follow the court's ruling, the people will drag and pull her down from power," the protest leader declared.