Arrest warrant out for Ko Tee

The Criminal Court yesterday issued a warrant for the arrest of pro-government demonstration leader Wutthipong "Ko Tee" Kochthammakhun on charges of insulting the monarchy. 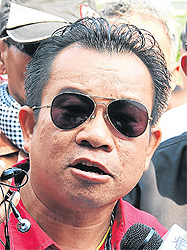 After the warrant was issued, police yesterday searched two places Mr Wutthipong had stayed at in Lam Luk Ka — a photo studio and a red-shirt community radio station — but failed to locate him.

The Pathum Thani red-shirt leader gave an interview in January to Canadian news magazine Vice, which contained remarks that allegedly insulted the monarchy.

CSD detectives and local police are attempting to track down Mr Wutthipong, searching his home in the Khu Khot area of Pathum Thani. Information from the Immigration Bureau suggests he is still in Thailand, though there have been suggestions he may have fled to a neighbouring country.

Army chief Prayuth Chan-ocha has confirmed that army intelligence is assisting in the search for the suspect.

Gen Prayuth said he had already discussed the matter with police chief Adul Saengsingkaew and an active search for Mr Wutthipong is under way.

“I would like everyone to calm down. Today he [Mr Wutthipong] incurs intense hatred. I do not think he can stay in hiding without turning himself in and facing the justice system," the army chief said. "I do not have any personal grudge against him, but he cannot hurt the [royal] institution like that. That hurts the hearts of people nationwide."

Gen Prayuth said it would be difficult to arrest Mr Wutthipong if he had left Thailand. He said lese majeste offenders usually flee to other countries which view lese majeste as a domestic matter.

These countries will usually acknowledge a request for cooperation, but will not cooperate in efforts to apprehend and extradite lese majeste suspects, he said.

He said the army was also in the process of filing complaints with the National Broadcasting and Telecommunications Commission and the Ministry of Information and Communication Technology against radio stations and radio hosts who offend the monarchy.

The army can no longer simply shut down radio stations as it could 10-20 years ago, he said.