Privy Council president Prem Tinsulanonda on Friday described the armed forces and the police as his "real friends" and said he was pleased to see them united. 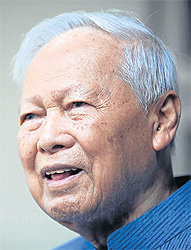 He said unity has made them a force to be reckoned with, that can keep out elements harbouring ill intent against the country.

Gen Prem was speaking at a traditional rod nam dam hua rite where the armed forces leaders and the national police chief sought his blessing for the Songkran festival, which ushers in the Thai New Year, at the Royal Thai Army Club yesterday.

The remark followed his refusal on Thursday to answer whether he would agree to mediate talks between caretaker premier Yingluck Shinawatra and anti-government protest leader Suthep Thaugsuban.

"If we keep together like this, we will be strong and make those with ill thoughts for the country fearful of us," he said.

Gen Prem also said despite the fact that he had been retired for 33 years, he continues to receive good care and hospitality from the armed forces and the police. This is a show of true friendship, he said.

"If we can remain united and perform our duties and work so others can keep to theirs, it will be our accomplishment and people can depend on, respect and trust us," he said.

Traditionally, the defence minister leads chiefs of the armed forces and police to pay respects to Gen Prem. This year, the supreme commander took over the duty. Ms Yingluck is in Chiang Mai.

Speaking at a separate venue, army chief Prayuth Chan-ocha said his Songkran prayer is for the country to be safe and return to normalcy.

He insisted all parties must play by the rules and that democracy must take into account the need to maintain and practice righteousness, ethics and fairness.