The founder of a royalist network on Wednesday sought to allay fears he is leading a lese majeste witch-hunt, insisting he is pushing only for legal action against palace critics. 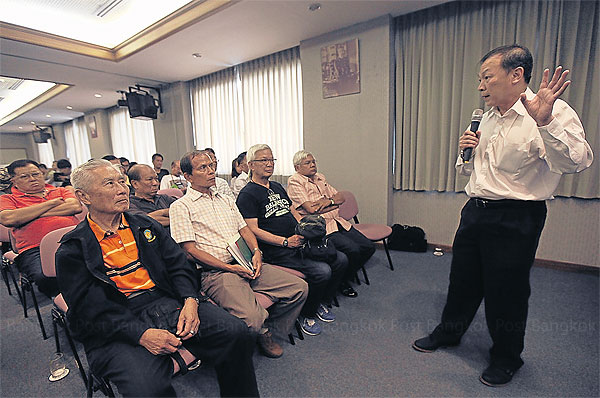 Maj Gen Rienthong Nanna discusses plans to form a special task force for his Rubbish Collection Organisation (RCO) that will push for legal action against people who insult the monarchy. Thiti Wannamontha

Rubbish Collection Organisation (RCO) founder Rienthong Nanna, who is also director of Mongkutwattana General Hospital, said during an orientation presentation for new recruits that he hoped more people would join his movement to protect the monarchy.

The RCO held its first meeting at the hospital Wednesday to recruit new members. It was joined by 25 retired soldiers who responded to an invitation posted on Facebook.

"We are not an organisation that hunts [monarchy opponents]," Dr Rienthong said. "We are an organisation which wants to develop society. We will encourage legal action against lese majeste law offenders.

“A lot of people who resent the violations against the monarchy will soon rise up. With the existence of the RCO, the uprising will be under control and the law.”

Participants at the meeting expressed their support for the RCO movement.

"We believe it’s the right thing to do. We will help the RCO as much as we can,” Maj Gen Charoen Techawanit said.

“We have links to our former subordinates who are still in the army."

Dr Rienthong said the meeting received positive feedback from participants and that he would call more meetings to invite people in other professions to join his group.

“We expect to hold these meetings by next month so we can set up strong networks that will be able to support our organisation," Dr Rienthong said. The RCO claims it had already established 2,000 teams of "People’s Army" volunteers to monitor lese majeste offenders on social media, television, radio and in the printed media.

The organisation hopes to create as many as 10 million teams of volunteers nationwide, Dr Rienthong said.

On Wednesday alone, about 300 offenders were discovered by RCO volunteers, he claimed.

The RCO will file complaints with police whenever it has enough evidence to prove violations of the lese majeste law have been committed, he added.

Ms Chatwadee has recently criticised the RCO on social media for "sowing the seeds of hatred" among Thais. She also wrote on the RCO Facebook page that she believes the lese majeste law is outdated.

Since the launch of the RCO on April 16, Dr Rienthong claims he has faced acts of intimidation by an armed group.

The hospital director said on Sunday that suspicious-looking men were seen lurking outside his house.

Mongkutwattana General Hospital was attacked with a grenade last month. The attackers have not been identified by police.

Dr Riengthong said yesterday the army has sent soldiers to protect him at home and at the hospital.

Col Winthai said safeguarding the private hospital and Dr Rienthong’s house was part of the duty of soldiers stationed in the Chaeng Watthana area.

The soldiers did not receive special orders from their superiors for this operation, he added.

The doctor is a staunch supporter of the anti-government People’s Democratic Reform Committee led by Suthep Thaugsuban.