Yingluck agrees to talks with Abhisit

Abhisit Vejjajiva begins his campaign to end the political crisis on Friday with talks with the Reform Now Network and Kittipong Kittiyarak, permanent secretary for justice. 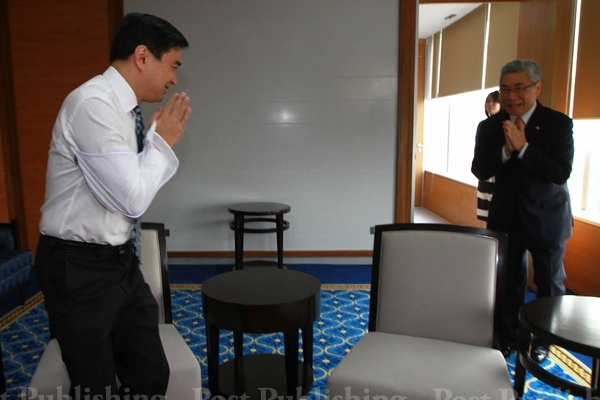 Democrat Party leader Abhisit Vejjajiva offers a wai to Kittipong Kittiyarak, permanent secretary for justice, as they meet on Friday to discuss possible solutions to the political crisis at the Thailand Institute of Justice in the GPF Building on Witthayu Road. (Photo by Somchai Poomlard)

"Don't appoint yourself as a middleman," said the Surat Thani powerbroker who once served as deputy premier under Mr Abhisit.

Ms Yingluck, meanwhile, said she was open to talks with Mr Abhisit to find a solution to the turmoil and praised his idea, which stressed the need to end the problem within the framework of the constitution, including a general election.

Mr Abhisit's initiative was a good start, she said, but added that she still needed to see the details.

Ms Yingluck said she had not yet been contacted by the Democrat leader.

It was the first response from Ms Yingluck since Mr Abhisit on Thursday offered to hold talks with all sides in a campaign to end the political deadlock.

Mr Abhisit refused to unveil the specifics of his blueprint, saying that it could jeopardise his efforts.

Talking with Ms Yingluck is high on his list, which also includes the People's Democratic Reform Committee (PDRC), Pheu Thai, other political parties, and possibly the red-shirt United Front for Democracy against Dictatorship (UDD).

He indicated that talks with the major conflicting parties - the PDRC, Pheu Thai and the UDD - could be last on the list.

Mr Abhisit said he hoped Mr Suthep would come around and support his plans to break the deadlock.

He said Mr Suthep had not seen his blueprint, but he believed the PDRC leader would be able to accept it.

But he conceded it would be impossible to make Mr Suthep happy while still offering something that is acceptable to other parties involved in the conflict.

The Democrat leader said that without a solution, peace and order would remain elusive even if the government successfully pushes for a fresh election or the PDRC manages to pull off its "people's revolution".

However, Mr Suthep clearly showed he was in no mood for talks.

"It doesn't matter if I know them, work with them or I am close to them," he said. "Don't they dare.

"The Suthep who played politics for 36 years isn't here any more. I am now a kamnan who pays heed to the people's demands only.

"I don't listen to anyone but the people. And the people want reform before elections, so we must get rid of the government to implement reforms."

Mr Suthep has openly declared that if the Yingluck government is forced from office, possibly by a court ruling, he would seize "sovereign power" in the name of "the people". He said he would recommend a prime minister for His Majesty the King to appoint and that he would countersign the appointment.

Mr Abhisit started his campaign on Friday by meeting with justice permanent secretary Kittipong Kittiyarak at the Thailand Institute of Justice in the GPF Building on Witthayu Road and with the Reform Now Network on Friday. All agreed on the need for reform.

''I received positive reactions from them today. They agreed with what I am trying to do,'' he said afterward.

His next meeting will be with Supreme Commander Gen Tanasak Patimaprakorn on Monday.

The UDD was not impressed by his lobbying campaign.

UDD leader Jatuporn Prompan said it was not a solution to the problems and there appeared to be no difference between the Democrat leader's approach and that of the PDRC.

''It is a way out for the PDRC and the Democrat Party,'' he added.

Noppadon Pattama, a legal adviser to former prime minister Thaksin Shinawatra, reacted cautiously. He said he hoped it was not a self-publicising campaign by Mr Abhisit.

Mr Abhisit's plan must be based on democratic principles and respect the decision of people, he added.

Mr Abhisit shrugged off criticism and vowed to go ahead with his efforts.

''Let those critics do what they like,'' he added.