The Election Commission (EC) and the caretaker government on Tuesday settled on a new election date of July 20 after caretaker Prime Minister Yingluck Shinawatra and her team promised to follow conditions for a free and fair election. 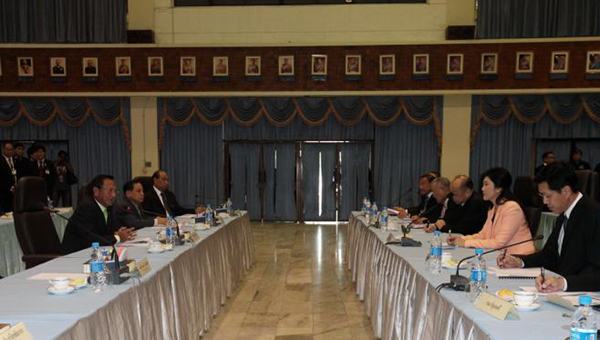 All five commissioners were in talks with the government, led by caretaker Prime Minister Yingluck Shinawatra in a meeting at the Royal Air Force Academy. Gen Nipat Thonglek, permanent secretary for defence, was also involved in the meeting.

The commission will meet next Tuesday to draft a royal decree announcing the election date.

The new election is necessary after the Constitutional Court declared unlawful the Feb 2 polls because it was not held on the same day as required by the charter.

EC secretary-general Puchong Nutrawong said after the meeting that the date was set with the conditions put forwarded by EC chairman Supachai Somcharoen and accepted by the government.

The poll organisers demanded a free and fair atmosphere be created for the polls, that security agencies fully back the election, the government be neutral, the EC be allowed to cancel some or all constituency polls if deemed unfair and plagued by opposition and that the government convene the new House of Representative 30 days after the vote.

The government agreed to the conditions, Mr Puchong said.

Asked whether the Democrat Party and the People's Democratic Reform Committee would still oppose an early election, he said that was something for the future. The EC could not predict what would happen, he added.

Caretaker Deputy Prime Minister Surapong Tovichakchaikul, who attended the meeting, showed confidence that the polls would end the political conflict and pledged support from security agencies to secure the election.

Another caretaker deputy premier, Phongthep Thepkanchana, said the decree will be put for cabinet approval as soon as possible once it is sent to the government from the EC.

Meanwhile, Democrat leader Abhisit Vejjajiva on Tuesday continued his bid to lobby for a late poll to allow more time for all sides to resolve the political wrangle.

He said after a meeting with the Palang Chon Party that the party showed no opposition to his idea but it needed to seek a common position from other parties joining the government.

Mr Abhisit has already held talks with the EC, reform advocates and the Chartthaipattana and Chartpattana parties.

Bhumjaithai Party leader Anuthin Charnvirakul said the party is open to all proposals to bring the country out of the crisis.

The People's Demcoratic Reform Committee's postion is to undertake reform before a new election is organised.