The Senate on Friday night elected Surachai Liangboonlertchai as its new speaker. 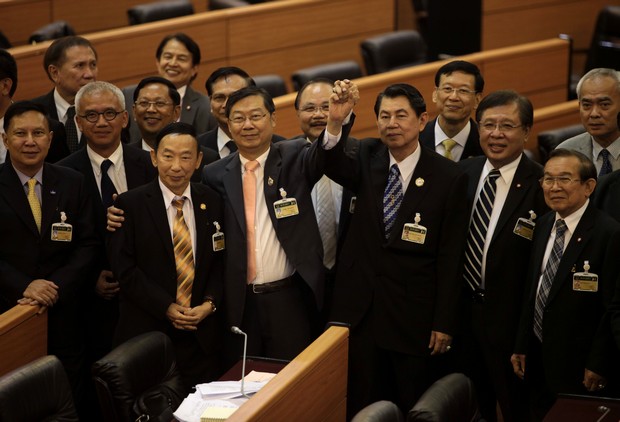 He won 96 votes while Pol Gen Jongrak Jutanont, the other candidate, got 51, with one absention.

All eyes were on the vote because anti-government forces including the Democrat Party have been pushing for the Senate speaker to appoint a new prime minister and/or cabinet.

Mr Surachai, an appointed senator, was a deputy speaker and acting speaker of the upper house. He is backed by the "Group of 40" appointed senators, the anti-government People's Democratic Reform Committee and elected senators from the South mainly affiliated with the Democrat Party.

Pol Gen Jongrak, also an appointed senator, was widely perceived as being supported by the Pheu Thai party although he has never made clear his affiliation.

Shortly after Mr Surachai's victory, PDRC secretary-general Suthep Thaugsuban called on him to submit the name of a new prime minister for His Majesty the King without delay. Failing that, Mr Suthep has said, the PDRC would appoint a "people's government" and premier.

CHAIYAPHUM: More than 3,000 houses in 23 villages in Bamnet Narong district are suffering under what is said to be the most severe flooding in 100 years.