The Criminal Court has approved arrest warrants for another 30 leaders of the People's Democratic Reform Committee (PDRC) on insurrection charges. 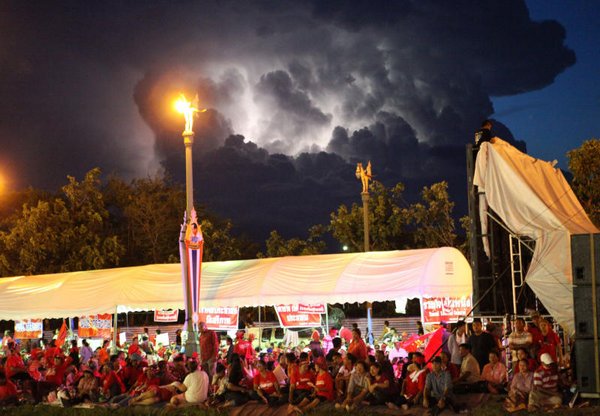 Summer storms have hit Bangkok on several recent evenings, including this lightning display in black clouds over the red shirts' protest in eastern Thon Buri. Tens of thousands of red shirts have gathered nightly for almost a week to try to apply pressure to save the government. (Photo by Seksan Rojjanametakun)

It comes as anti-government protesters appear set to ramp up pressure on the Senate to name a new "neutral" premier by Friday.

The arrest warrants were sought by the Department of Special Investigation (DSI), which last week agreed to indict 43 PDRC leaders on charges of insurrection stemming from the months-long anti-government protests.

The court agreed to issue warrants for 30 of the leaders, saying they have never been the subjects of arrest warrants previously and should be arrested and prosecuted as soon as possible.

The court, however, rejected the request for the 13 other warrants, saying those leaders had been the subject of earlier arrest warrants relating to their involvement with the People's Alliance for Democracy (PAD), which led protests against the Thaksin Shinawatra-backed government in 2008.

The court said that because these 13 suspects have already been prosecuted in court and released on bail, there is no need to approve new arrest warrants for them.

PDRC secretary-general Suthep Thaugsuban was not among the 43 as he is already the subject of an arrest warrant for insurrection.

Meanwhile, a PDRC source said the 43 protest leaders had all been closely monitored by plainclothes police officers in the lead-up to Wednesday's court decision. "Because of that, more guards have been deployed to take care of the leaders," the source said.

Responding to the Centre for the Administration of Peace and Order (Capo)'s call for protesters to stop pressuring the Senate into installing a new prime minister, PDRC spokesman Akanat Prompan insisted the country has been left without a prime minister or government and cannot go on without administrators.

Niwatthamrong Bunsongphaisarn has been appointed acting caretaker premier by the cabinet, but the PDRC has refused to recognise his authority. It followed a Constitutional Court ruling last week which stripped former premier Yingluck Shinawatra and nine cabinet ministers of their powers.

Mr Akanat insisted the only solution to the impasse is to quickly seek a new premier, and time must be given to acting Senate Speaker Surachai Liangboonlertchai to make a move on the issue.

He said the Upper House president had made it clear that the matter will be "settled" by Friday.

According to the PDRC source, the protest group leaders met Wednesday to decide a strategy in the event the Senate either succeeds or fails to install a new premier under Section 7 of the constitution.

The PDRC plans to apply more pressure on the Upper House before Friday, the source said, without clarifying what that might entail.

The protest group also wants the Election Commission (EC) to halt plans for a July 20 general election so that reform can take place first, the source added.

Metropolitan Police Bureau deputy commissioner Thitirat Nongharnpitak said a plan to apprehend the 30 core PDRC members who are now subject to arrest warrants had been discussed in detail prior to Wednesday's court decision.

Pol Maj Gen Thitirat, who is responsible for investigation affairs, said an 11-man team led by a police inspector had been assigned to monitor the movements of each PDRC member after the DSI asked the court to issue the warrants.

He denied media reports that police from the Arintarat commando unit or other special task forces will be assigned to take part in the arrest operation. "No matter what happens, authorities will not resort to violence to arrest them," he said.