July 20 election unlikely to go ahead

Anti-government protesters forced an abrupt end to a meeting between the Election Commission (EC) and the caretaker government Thursday, throwing plans for a July 20 election into disarray. 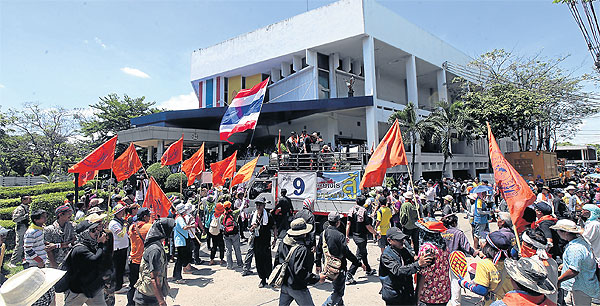 Demonstrators led by Suthep Thaugsuban lay siege to an auditorium at the Royal Thai Air Force Academy where the caretaker government and the Election Commission were meeting to discuss the election date. The siege brought the meeting to an abrupt end. (Photos by Thiti Wannamontha)

The meeting was held at Karntanarat auditorium at the Royal Thai Air Force Academy in Don Muang district to discuss whether acting caretaker Prime Minister Niwattumrong Boonsongpaisan has the authority to issue a royal decree and the possibility of the EC postponing the poll in case problems arise.

Twenty minutes into the meeting, participants were warned that dozens of anti-government protesters had breached the security cordon and massed in front of the auditorium. Their arrival prompted Mr Niwattumrong and his delegation to abandon the meeting.

The protesters demanded they be allowed to attend the meeting, but were blocked by military police. They were eventually joined by People's Democratic Reform Committee (PDRC) secretary-general Suthep Thaugsuban.

However, by the time they managed to enter the auditorium, no one was there. (Story continues below) 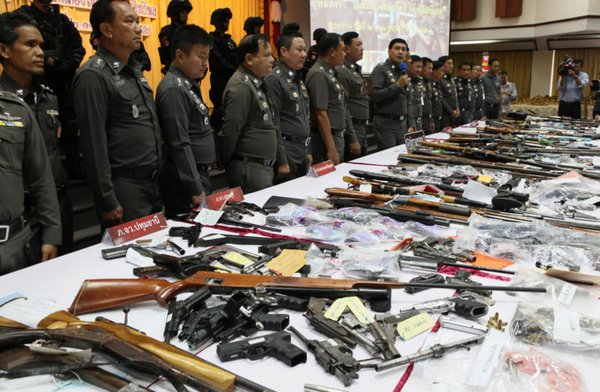 Arms and the protests: Police on Thursday held a press conference to show some of the arms and explosives found immediately after the People's Democratic Reform Committee (PDRC) left Lumpini Park Monday to their new base at the Democracy Monument. (Photo by Apichit Jinakul)

EC member Somchai Srisutthiyakorn, in charge of election administration, said the meeting was abandoned before the major issues could be discussed.

The election is likely to be postponed because a royal decree calling the poll will not be ready by Thursday for submission for royal endorsement, Mr Somchai said.

Asked about the PDRC demand to meet the EC, Mr Somchai said the EC is ready to hold talks but the anti-government group should make an appointment. The government delegation left the meeting without scheduling another date, he said.

A source close to the failed discussions said EC chairman Supachai Somcharoen began the meeting by asking about the political climate and possible disruptions to the election.

The commissioners were not impressed by the government's reply that protester numbers were falling.

"You were afraid to meet us at our office. How can we be so sure the political climate is good enough to hold an election," the source quoted Mr Supachai as saying.

At this point Suranand Vejjajiva, secretary-general to the prime minister, approached Mr Niwattumrong and whispered something to him. The acting caretaker prime minister then rose and immediately left the meeting, the source said.

Another source said Pol Gen Adul told the meeting the situation was unpredictable and would have to be assessed on a daily basis.

Mr Niwattumrong told the EC that the country was in urgent need of a new government to solve problems. He expressed confidence the EC would be able to hold an election even though the political situation remains tense.