About 300 men armed with guns and wooden clubs detained and savagely assaulted villagers in Loei late on Thursday who were protesting against the operation of a local gold mine. 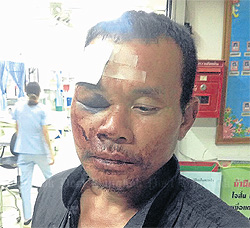 An unidentified man shows his bruises from being assaulted by men during a conflict between Ban Na Nong Bong villagers in Loei’s Wang Saphung district and a local mine operator. FAIKHAM HARNNARONG

The villagers in Wang Saphung district had constructed a concrete barrier across the main road leading from the Tungkum gold mine to a nearby highway. They fear the road, which passes several villages, will be used to transport toxic chemicals to and from the mine.

About 10pm on Thursday, an 18-wheel trailer, two pickups and four vans loaded with around 300 men drove towards the barricade and approached the protesters.

With guns raised, the men forced the roughly 30 protesters to lay down on the ground, protest leader Surapan Rujichaiwat said. They then bound their hands and feet.

A backhoe was then used to destroy the barrier, and several trucks were seen transporting materials out of the mine.

About 2am yesterday, another group of villagers arrived and tried to break the line of armed men and free the 30 detained protesters.

In the ensuing clash, a gunshot was heard and some of the detained villagers were seen being beaten by their captors. The clash failed to free the hostages.

“A guard said to me, ‘If you don’t stop [the anti-mine movement], I’ll hurt your children and your wife’,” Viron Rujichaiwat, a villager, said.

While the 30 locals were being held, 12 trailer trucks loaded with copper were reportedly driven out from the mine while the group of men guarded the path.

The last truck departed about 4.30am, after which time the hostages were released.

“It seems like the state has no laws,” Ms Viron said. “The attack encourages us to fight more. We will not let anyone gain access to the mining site.”

Mr Surapan and other villagers said they were beaten during the time they were being held. About 20 were slightly injured, while seven were sent to hospital with bruises and open wounds.

Mr Surapan received 10 stitches above one of his eyebrows. One villager is reported to have serious internal injuries.

The villagers said they contacted police when the armed men arrived at the barrier, but only two officers arrived yesterday morning, after everything was already over.

At noon yesterday, about 300 residents from six villages located around the mine gathered at Wang Saphung police station to demand the removal of Pol Lt Col Rattapol Pensongkhram, the area’s deputy police chief.

The villagers accused Pol Lt Col Rattapol of failing to help villagers during the clash.

The community has been in a dispute with gold mine operator Tungkum Co, a subsidiary of Tongkah Harbour Plc, since last year.

In October, Tungkum sued seven villagers for trespassing, claiming the concrete barricade had been built on company property. The locals say the site is a public road.

The villagers believe the attack yesterday involved a senior army officer who had threatened them last month if they failed to remove the barricade.

The soldier reportedly claimed he worked for the Loei provincial administration organisation’s Thanawut Timsuwan, whom the villagers say is an ore purchaser.

The army officer reportedly offered to withdraw Tungkum’s lawsuits against the villagers if they complied with the request to end their protest, but the villagers refused.

Tungkum has denied any connection with the solider.

Mr Thanawut told the Bangkok Post yesterday he had no involvement with the mine. “I’m a local politician. I’m not a businessman. I’ve never been involved [with gold mine operators],” he said.

The National Human Rights Commission is set to launch an inquiry into the incident tomorrow.

The army officer could not be reached for comment.