The Royal Thai Army on Tuesday declared martial law across the crisis-gripped kingdom to restore order following months of anti-government protests that have left 28 people dead and hundreds wounded. 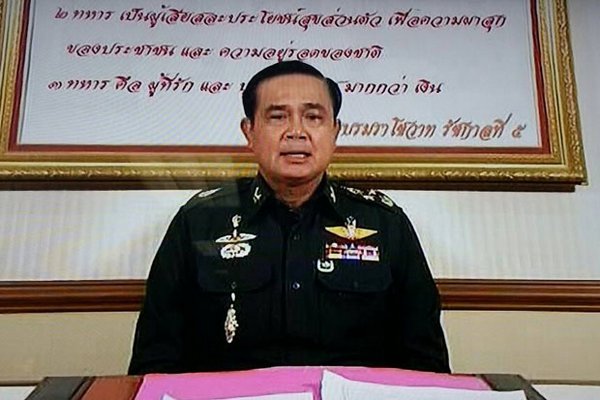 The military statement was signed by army chief Gen Prayuth Chan-Ocha. It cited a 1914 law that gives it authority to intervene during times of crisis, and said it had taken the action because on-going mass rallies between political rivals "could impact the country's security and safety of the lives and properties of the public."

An announcement broadcast on army-run TV Channel 5 said martial law had been invoked "to restore peace and order for people from all sides", stressing that the move "is not a coup".

"The public do not need to panic but can still live their lives as normal," it added.

The army said in a statement that the military had taken the action to "keep peace and order" and soldiers entered several private television stations in the capital.

An army official, speaking on condition of anonymity because of the sensitivity of the situation, told the US news agency, The Associated Press, "This is definitely not a coup. This is only to provide safety to the people and the people can still carry on their lives as normal."

Martial law gives the army control over security, but leaves the government in command of other tasks, unlike a coup.  Thailand has witnessed 18 coups in the past eight decades, the last of which ousted former prime minister Thaksin Shinawatra in 2006.

"It looks like he [Gen Prayuth] may have decided to do this without consulting the government, since his first order was to dissolve the CAPO which was jointly run by the government and police," said Panitan Wattanayagorn, a political scientist and military affairs analyst at Chulalongkorn University.

"I think Gen Prayuth is trying to neutralise the confrontation between the PDRC and elements of the pro-government groups who have threatened to fight back if Suthep's group capture some of the ministers," Mr Panitan said.

Thailand has been wracked by six months of non-stop protests seeking to topple the government.

At least 25 people have died in political-related violence and more than 700 injured.