The military has taken centre stage in the protracted political crisis by assuming what it described as a "mediating role" after deploying troops on the streets yesterday to impose martial law.

Army chief Prayuth Chan-ocha made the surprise announcement shortly before dawn Tuesday, without first consulting other armed forces leaders or the caretaker government.

The imposition of martial law covers the entire country and took effect from 3am Tuesday.

The declaration drew mixed reactions from several quarters, with some saying it favours anti-government protesters while others labelled the move a "silent coup".

Emerging from a meeting with senior government officials at the Army Club Tuesday afternoon, Gen Prayuth called for calm and explained that the invocation of martial law was only about maintaining order and preventing more civilian deaths.

The army chief said he wants to find middle ground amid the deeply divided political environment. He conceded this would take time, but said he did not envisage martial law being in effect for many months.

The main purpose of the move is to maintain order so a solution to the conflict can be worked out without undue pressure from any one side, he said.

The senior officials at the meeting recognised the need for the military to declare martial law and insisted the armed forces and police are united, he added.

Gen Prayuth said imposing martial law was justified given the deaths of 28 people and more than 700 injuries during the course of the People's Democratic Reform Committee (PDRC) protests over the past six months.

"Even one death is more than enough," he said.

"With martial law enforced, it marks step one on the path to peace, which will be quickly restored."

Gen Prayuth apologised for suspending the broadcasts of some media outlets, saying it was for security reasons. (More on censorship below)

He also stressed that not every section of the Martial Law Act would be enforced to avoid far-reaching consequences.

No curfew will be put into effect, he said.

Gen Prayuth will act as chief of the newly established Peace and Order Maintaining Command (POMC), which is responsible for overseeing security enforcement while martial law is in place.

He plans to invite all parties involved in the political conflict for talks to resolve their differences. Asked if the parties will agree to the invitation, Gen Prayuth said: "If I call all sides, they will come."

The army chief also responded to a question asking whether the army needed to consult the caretaker government on future actions it might take. "Where is the government?" he said.

Acting caretaker premier Niwattumrong Boonsongpaisan insisted the army is required to abide by the constitution in maintaining law and order.

He called on the military to keep to a single standard when handling groups with different political leanings.

"The [caretaker] government must still do its administrative duty as required by the charter," he said, adding that he expected to hold talks with Gen Prayuth this week.

Caretaker Justice Minister Chaikasem Nitisiri said the army chief is duty-bound to inform the caretaker government immediately of its actions. The government is now waiting to see what the military will do next, he said.

"It's fine that Gen Prayuth has declared martial law. But he still works under the command of the [caretaker] government," he said, adding that martial law affords the military more administrative power than it does civilian authorities.

Ousted premier Thaksin Shinawatra took to his Twitter account for the first time in 287 days to say the declaration of martial law was not suprising given the political situation.

Thaksin said he hoped no one would violate human rights and undermine the democratic system any further.

Acting Senate Speaker Surachai Liangboonlertchai said the Senate will push ahead with its proposal to install an interim prime minister and government invested with full authority to run the country, adding that the details of its plan to end the political crisis should be finalised in the next few days.

"It's good for the director of the POMC to mediate [peace talks]. I hope his efforts will succeed, which will help ease the Senate's task," he said.

Speaking to supporters at the rally stage on Ratchadamnoen Avenue, PDRC secretary-general Suthep Thaugsuban asked supporters to give moral support to the military.

However, he insisted the PDRC will stick to its protest schedule, saying that demonstrators will on Friday march from Ratchadamnoen Avenue to Sukhumvit Road between 5pm and 9pm and also on Saturday and Sunday to undisclosed locations. 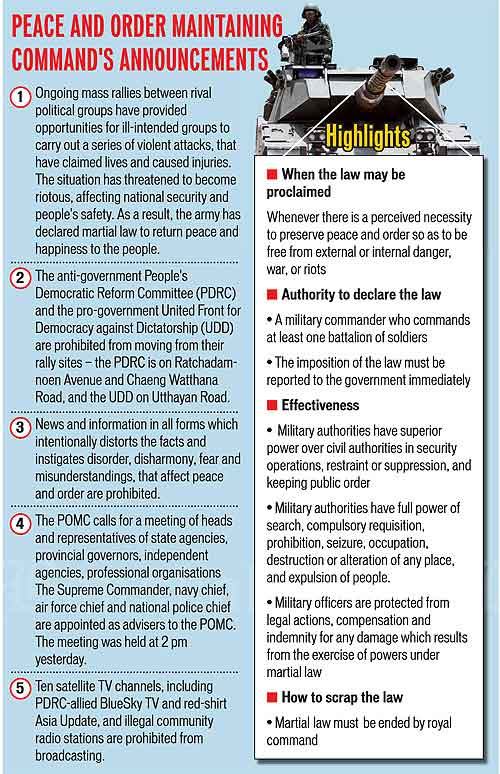 This would be in violation of martial law.

Mr Suthep said the PDRC would declare "the people's victory" on Monday.

United Front for Democracy against Dictatorship (UDD) chairman Jatuporn Prompan said he was ready to negotiate with Mr Suthep, but insisted the talks must be "based on the principles of democracy".

He insisted the UDD will protest if there is a coup or if an unconstitutional prime minister is appointed.

Chulalongkorn University political scientist Panitan Wattanayagorn told the Bangkok Post he believed the military's role in the political situation was still "positive", even if the declaration of martial law is seen as a "quasi-coup".

"The military has two obvious choices — either use this opportunity to create a secure and inclusive environment for elections and reform under a civilian government, or to push for a pseudo-legitimate process that replaces the caretaker government with transitional guarantees for the traditional elites," legal analyst Verapat Pariyawong said.

"The moment of unmasking is coming," he added.

Elsewhere, there was a report that certain Shinawatra family members, including former premier Yingluck, and some cabinet members had fled to border areas in the North following the declaration of martial law for fear of being arrested.

After these first five commands (below) from the martial law office, three additional ones were issued late Tuesday, including Order No.8 commanding all media including newspapers to self-censor interviews with critics of martial law or the martial law authorities. It also warned all internet ISPs and social networks against allowing comment "which could cause disorder". This newspaper has not conducted any such self-censorship to date.