The military seized power, dissolving the caretaker government, suspending the constitution and ordering protesters to return home in a bloodless coup Thursday. 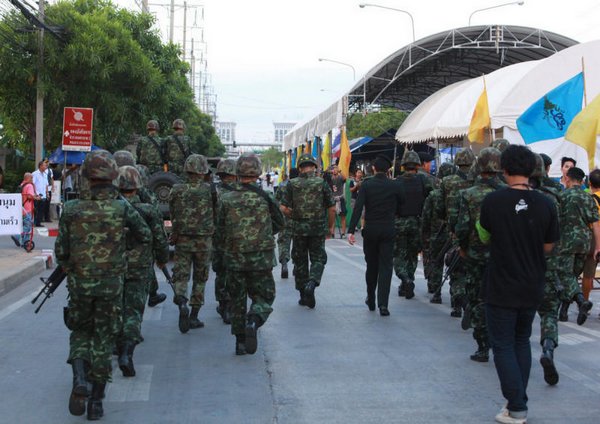 By nightfall Thursday, and after some resistance including warning shots by companies of army forces, the military had closed down street protests by anti-government (above) and pro-government demonstrators on opposite sides of Bangkok. More photos below. (Photo by Tawatchai Kemgumnerd)

The power seizure took place after talks between the pro- and anti-government camps failed for a second day Thursday.

The army brought them together for talks to settle the country's protracted political conflict, without success.

Military sources said the negotiations were brought to an end after the government insisted on holding on to power. 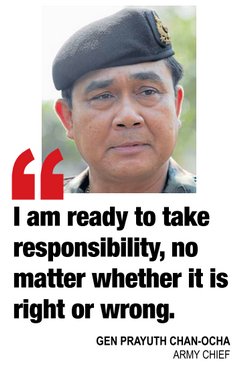 Army chief Prayuth Chan-ocha, who chaired the talks, left the Army Auditorium, the venue of the talks, as soldiers moved in to detain all negotiators and whisked them away in passenger vans.

Representatives of the Senate and the Election Commission were later allowed to go free.

Radio and television stations were ordered to suspend their normal broadcasts. A curfew between 10pm-5am was imposed and gatherings of more than five people banned.

All schools nationwide were ordered closed from Friday until Sunday.

In its first coup statement, the military cited the eruption of violence in Bangkok and other provinces which resulted in many deaths and injuries in the past months as the reasons behind the power seizure.

Appearing on all television channels along with other armed forces leaders and the national police chief about 4.30pm, Gen Prayuth read the statement.

He said the violence in the country had been escalating to such an extent that it stood to undermine national security and public safety.

The coup would help restore normalcy and national unity, ensure reform of political, economic and social institutions, and ensure legitimacy to all sides, he added.

The National Peace and Order Maintaining Council (NPOMC), which comprises the armed forces and the Royal Thai Police, took control of national administration as of 4.30pm Thursday.

Gen Prayuth called on the public to remain calm and to carry on with their everyday lives, and for civil servants at all ministries and government agencies to continue with their normal duties.

As for military personnel, police, volunteers and state authorities who carry weapons, they must not move any personnel or weapons anywhere unless they receive an order allowing them to do so from the head of the NPOMC.

The council said Thailand's relations with other countries and international organisations would remain intact.

The council would also remain steadfast in its allegiance to the royal institution.

A third announcement was issued imposing a nationwide curfew between 10pm and 5am, effective as of last night.

Citing sections 10 and 11 of the Martial Law Act, the council issued a fourth announcement ordering all state and private radio and television stations to halt broadcasts of their normal programmes and to relay broadcasts from the army's radio station.

The council also issued an announcement suspending enforcement of the current constitution temporarily, while keeping the constitution's chapters relating to the monarchy intact.

With the enforcement of the charter suspended, the caretaker cabinet vacates office while the Senate, the courts of justice and independent organisations under the constitution continue to function normally, according to the announcement.

Citing sections 8 and 11 of the Martial Law Act, the council also imposed a ban on political gatherings of more than five people.

The penalty for violating the order is a jail term of up to one year and/or a fine of up to 20,000 baht.

All 18 former members of the caretaker cabinet were also ordered to report to the NPOMC at the 1st Infantry Regiment immediately.

Acting Senator Speaker Surachai Liangboonlertchai said the Senate no longer has the authority to appoint a prime minister.

Apart from those detained by the NPOMC, the whereabouts of most of the members of the now-defunct caretaker cabinet were not known.

A source close to him said Mr Niwattumrong may have known about the coup and then rushed to a safe house.

After the meeting ended inconclusively, United Front for Defence of Democracy against Dictatorship (UDD) co-leaders were reportedly whisked away in a van with soldiers carrying arms escorting them inside the vehicle

Meanwhile, People's Democratic Reform Committee (PDRC) secretary-general Suthep Thaugsuban and other co-leaders such as Sathit Wongnongtoey and Akanat Promphan were also taken in another van with armed soldiers guarding them inside the vehicle.

They were reportedly taken to the 1st Infantry Regiment (King's Guard) on Soi Phahon Yothin 8 in Phaya Thai district of Bangkok.

As the meeting began at 2pm, Gen Prayuth told participants in stern tones that he could not afford to let the political crisis plaguing the country drag on without a solution.

"I am ready to take responsibility, no matter whether it is right or wrong," Gen Prayuth said, adding that he hoped all stakeholders will help the army improve the political situation.

The army chief said he was aware that many people had been worried about the declaration of martial law.

Mr Niwattumrong did not attend the meeting as he had other engagements.

He said the government could have been accused of dereliction of duty if it had resigned.

His position was reaffirmed by the government's representatives at the military-brokered meeting, prompting Gen Prayuth to order leaders of both the pro- and anti-government sides into a private room for a further meeting, said the source.

Gen Prayuth mediated the meeting in the beginning but later asked them to continue their talks on their own until they could come up with an agreement.

"If you cannot finish your talks, you can't go home," Gen Prayuth was quoted as telling both sides.

No one in the main meeting room could leave, while a large number of armed soldiers was standing guard, said the source.

The mobile phone signals of participants were jammed and all headsets banned from being brought into meeting rooms, said the source.

After about 45 minutes of meeting in the private room, the participants were led back to the main meeting room, said the source.

After that Gen Prayuth invited UDD chairman Jatuporn Prompan and Suthep Thaugsuban, secretary-general of PDRC, to another private meeting for about one minute.

"As such, from now on I decide to seize power," Gen Prayuth was quoted as saying.