Yingluck reports to the generals

A van carrying Yingluck Shinawatra arrives at the Royal Army auditorium as the former prime minister reported to the National Peace and Order Maintaining Council on Friday.

Former prime minister Yingluck Shinawatra on Friday reported to the National Peace and Order Maintaining Council (NPOMC), and the coup-makers warned those defying the summons will be arrested and face legal action. 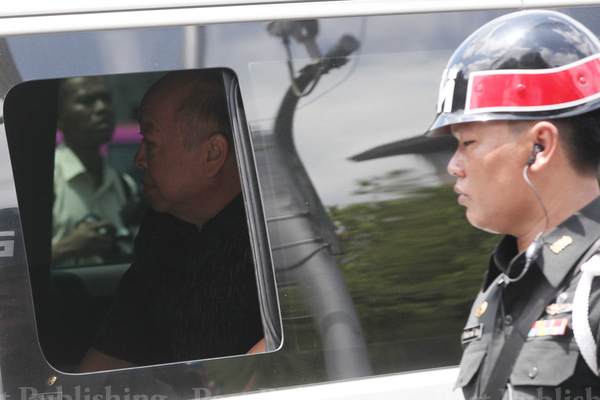 She and others who have reported to the council are banned from leaving the country.

Ms Yingluck arrived at the Royal Thai Army auditorium in Thewes in a black bullet-proof Volkswagen van, with a vanguard of bodyguards. The team cleared the way and made arrangements with soldiers at the gate of the army auditorium before her arrival.

Ms Yingluck is among the 155 people Gen Prayuth Chan-ocha, the army chief and head of the NPOMC, summoned as part of his moves to restore peace to the nation. They included key politicians, important figures connected with Ms Yingluck's past government, and leaders of pro and anti-Yingluck administration protest movements. 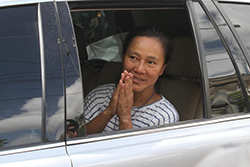 The NPOMC issued an announcement about noon Friday  prohibiting all 155 summoned people from leaving Thailand without permission.

The announcement also said that those who refused to turn themselves in to the NPOMC would be arrested and prosecuted, council spokesman Col Winthai Suwaree said.

Ms Yingluck's appearance ended speculation that she had left the country after Gen Prayuth declared martial law on Tuesday followed by a coup on Thursday.

Mr Yangyong was the first of her former cabinet to report to the council, arriving about 9am.

Mr Niwattumrong arrived at 9.35am, followed by Chalerm Yubamrung, former labour minister and director of the dissolved Centre for the Administration of Peace and Order, and Tongthong Chandransu, permanent secretary of the PM's Office. Soldiers have stayed with Mr Chalerm since Thursday night.

Anchalee Paireerak, a leader of the People's Democratic Reform Committee, also reported  in at the auditorium on Friday morning - the first leader of the anti-Yingluck Shinawatra government movement to show up, apart from those who were detained on Thursday during a meeting with Gen Prayuth.

Cambodian police have arrested three Thais and charged them with stealing a taxi when the driver stopped to go to the toilet.

Thailand's household debt to gross domestic product ratio stood at 89.2% in the first quarter, slightly down from a revised 90.0% in the previous quarter, central bank data showed on Thursday, as the economy continued to recover.