The National Council for Peace and Order (NCPO) is hardening its stance on violators of lese majeste and national security laws as well as those who breach the junta’s standing orders. 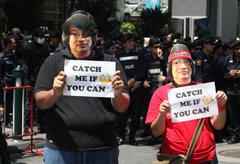 In its 37th announcement Sunday, the NCPO said violators of the Criminal Code’s Sections 107-112 and 113-118 would be subject to court-martial proceedings.

Those who defy the junta’s orders would also suffer the same fate, the NCPO warned.

The measure will not cover legal violations committed during the invocation of the 2008 Internal Security Act and the 2005 Emergency Decree, it said.

Sections 107-112 deal with lese majeste offences against the royal family and representatives appointed by His Majesty the King. Sections 113-118 cover the broad subject of "national security".

Gen Prayuth had earlier warned anyone making offensive remarks against the monarchy to immediately cease their actions.

In recent years, calls had been made for the Information and Communication Technology Ministry and security agencies to take action against violators of lese majeste law and websites which contain offensive comments about the monarchy.

However, the problem has not been seriously addressed. (Story continues below) 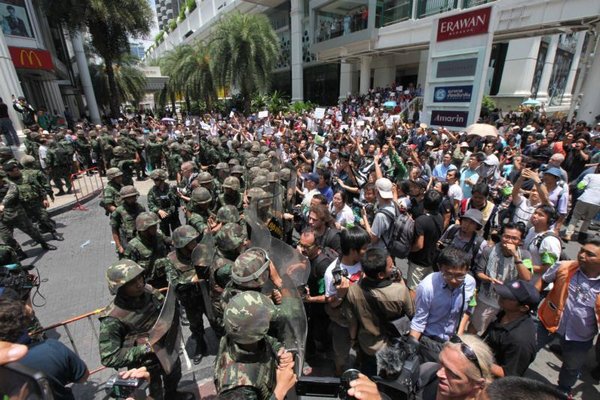 At the height of the protest, several thousand people participated in confronting the troops in the Ploenchit and Ratchaprasong areas of Bangkok.

According to a statement posted on www.ilaw.or.th, the website of Law Education for People, it is unusual for civilians to be tried in courts martial, as defendants are given no right to appoint a lawyer or to file a suit with the court. Their case must be handed over to military prosecutors to act as their legal representatives.

The website said that if the military court is expected to deliver justice, the fact that defenders cannot appoint their own legal representative might make them feel as though they are being treated unfairly.

Meanwhile, a royal command formally appointing Gen Prayuth as leader of the NCPO will be issued Monday, according to Lt Gen Panuwat Nakwong, an assistant to the army chief of staff. 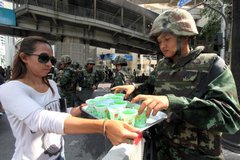 A member of the public offers drinking water to a soldier on security duty at the protest site.

He said Gen Prayuth is expected to receive the royal command Monday morning and would make a public address to the nation after that.

He said the address is expected to outline plans for the introduction of an interim constitution, the appointment of a new government, and the setting up of the national legislative assembly and political reform body.

Meanwhile, the NCPO says it will begin handing over to law enforcement authorities today a group of individuals detained by coup-makers who face criminal charges.

None of the figures summoned to report to the NCPO will be detained for more than the maximum seven days allowed under martial law, and the timing of their release will depend on their role in the political conflict, it said.

He was reading a statement from Gen Prayuth clarifying the political developments in recent days, during which time some 200 prominent political figures have been summoned to report to the coup-makers. 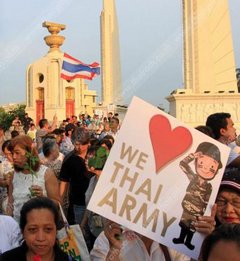 Not everyone on the streets on Sunday opposed the coup. A small group at the Democracy Monument demonstrated in favour of the military. (Photo from social media)

According to Col Winthai, none of the detainees have been tortured or mistreated and they are being kept in suitable accommodation. They have been asked to explain their side of story as the NCPO seeks to establish facts about the current situation.

“We have informed them of the need to cooperate to help solve the country’s problems,” Col Winthai quoted Gen Prayuth as saying.

“Please be informed that it does not stem from hatred or personal opinions." According to Col Winthai, searches and raids of suspicious locations will continue after large weapons hauls were seized over the past week.

The NCPO spokesman also clarified the alleged detention of Panthongtae Shinawatra, son of the fugitive ex-prime minister Thaksin, after pictures of Mr Panthongtae being escorted by troops were circulated via social media networks on Friday night.

Pravit Rojanaphruk, a senior reporter of The Nation newspaper and a columnist for Prachatai website, and Paiwong Techanarong, owner of the Bonanza Khao Yai Resort, summoned by the NCPO turned up at the Royal Thai Army auditorium Monday.

The Foreign Correspondents’ Club of Thailand expressed deep concerns over the detention of Mr Pravit and Thanapol Eawsakul, the editor of Fah Diew Gan magazine.

“While this may impede coverage in the short term--and make it harder for journalists on the ground to produce accurate, balanced reports--it will not diminish interest in this story or make it go away,” warned the FCCT. 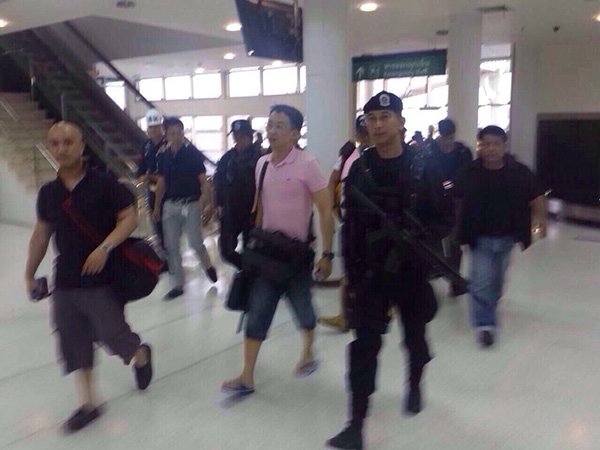 One of the photos on social media, apparently showing Panthongtae "Oak" Shinawatra receiving close personal help from soldiers in getting on an airplane at Chiang Mai airport.