The military coup has scared tourists off and seen some pack up and leave earlier than planned. 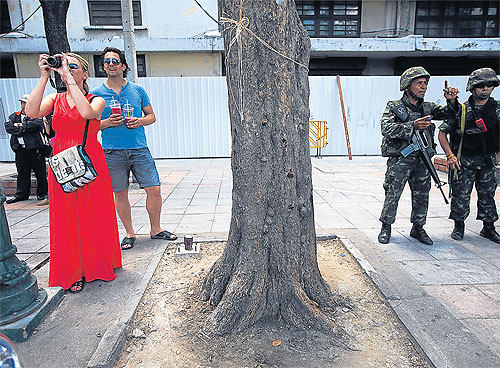 Not every tourist was in a hurry to leave. This visitor took time to snap a photo on Ratchadamnoen Avenue next to troops deployed to try to enforce the coup after the military seized power and imposed martial law. (Bangkok Post photo)

Difficulties in communication combined with the unpredictable political situation prompted Wendy Berry, a first time visitor from the United Kingdom, to leave the country earlier than her original departure date of June 2.

“I cannot send messages to my family back at home, and their messages were not coming through to me. They don’t even know I’ve decided to cut my holiday short,” Ms Berry said.

Ms Berry landed in Thailand last Tuesday morning, a few hours after the military had announced martial law, but was told by her tour guide that the law was only imposed to keep peace in the country.

“I can’t even monitor the situation here because I cannot access any sort of news. How am I supposed to know if things are going to get better or worse?” she asked.

Ms Berry decided to cancel her 10-day trip to Krabi, despite the fact that the situation in the beach town was reportedly stable. She decided not to take any risks, since it was difficult for her to connect with her family at home.

When asked if she would consider returning to Thailand in the future, Ms Berry said she would not want to risk being stuck in such political chaos again, adding that cancelling her trip had affected her finances.

He too cut short his holiday due to the current political situation and was waiting on a standby list for a flight home.

He decided to leave the country once he heard about the coup because he worried about the possibility of the airport shutting down.

“My uncle called me from the States last night and convinced me to get on the first possible flight. I am travelling by myself, therefore he didn’t want me to be stuck here should the situation get worse,” he said.

He mentioned that although he had to leave early due to the political crisis, he has had an amazing time visiting Thailand and is determined to come back in the near future.

Rachel Deck, an Australian tourist who arrived at Suvarnabhumi airport on a connecting flight from Cambodia on her way home, said she was "shocked" when she first heard the news and was worried that her journey could be disrupted.

However, she was relieved when she realised the airport was open and unaffected, and was positive about being able to fly back to Australia on schedule.