NCPO under fire for silencing critics

The coup makers on Monday faced rising criticism from academics and non-governmental organisations over controversial orders seeking to bar scholars, analysts and the media from making comments about them. 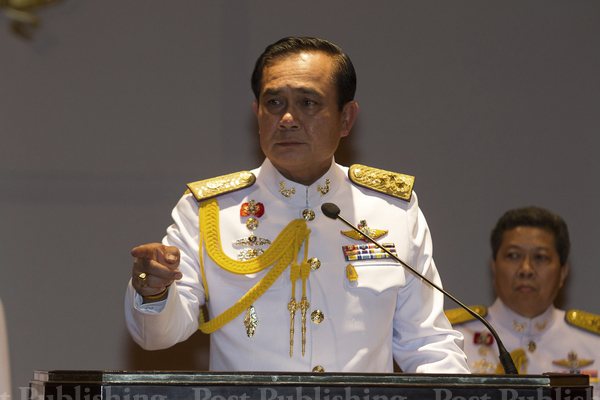 Army chief and coup leader Gen Prayuth Chan-ocha holds a press conference at the army headquarters on Monday, mostly focussing on warning the media against reporting news which deepens the conflict. (Photo by Pattanapong Hirunard)

The Thailand Development Research Institute (TDRI), 77 academics and the NGO Coordinating Committee on Development  (NGO-COD) all issued separate statements along the same line, urging the National Council for Peace and Order (NCPO) to end the orders.

TDRI president Somkiat Tangkitvanich said after a meeting with staff that the think tank was "deeply worried" about a threat to academic freedom in the first days after the coup.

"Those in power should be open-minded to different opinions, especially under the present circumstance when there are no mechanisms to check and balance the power of the state," the statement said.

"'I believe that academic freedom will provide comments and suggestions for the benefit of the NCPO," the official name of the junta, he added. The generals had threatened legal action against critics, Mr Somkiat said.

The TDRI chief said reform must be undertaken in a democratic environment. It should include those with differing views.

TDRI, which played a key role in monitoring alleged corruption in the rice-purchase scheme under the deposed Pheu Thai government, also spoke out on two other moves to curb the media.

The NCPO issued two much debated orders last week. Order 14 aimed at scholars who oppose a military regime, while Order 18 bans criticism of the junta by the mainstream media.

Meanwhile, the group of 77 scholars nationwide made a similar call, urging the junta to release all anti-coup protesters as well as critical students and scholars.

"Please stop jeopardising academic freedom by keeping critical views off media outlets," said the group's strongly worded appeal. "The academics are also doing their duty for the sake of prosperity and national security."

The military should quickly return power to the people to avoid bloodshed, the appeal added.

"Absolute power without accountability and transparency, all the while silencing critics, will never bring peace, equality and justice to any society including Thailand," it said.

The NGO-COD, which is an umbrella of non-government organisations, also demanded the military halt its attempt to curb media and academics who wish to air political comments.

Threats against scholars, activists, the media and people who oppose the coup should end, it said. The group called for a "quick return of power to people to bring the country back to a normal situation".

Army chief Prayuth Chan-ocha, who also is the junta commander, on Monday renewed a call for the media to be cautious in reporting news which could deepen conflicts and warned commentators on Facebook they could face closure of their accounts for remarks on the social site — presumably meaning the blocking of individual Facebook walls.

He was speaking at a 20-minute press conference held at army headquarters after a ceremony to receive a royal command officially appointing him the coup chief.