Anyone spreading rumours or false or provocative information will be targeted by the National Council for Peace and Order (NCPO), deputy army spokesman Col Winthai Suwaree said on Monday. 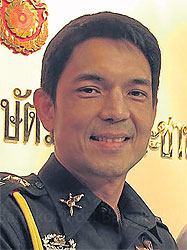 Social media has been used as a tool to provoke public hatred, he said. Using it to spread rumours has been the biggest problem for the coup-makers.

The NCPO is working to cut communication channels used by these groups, Col Winthai told reporters at the Thai Army Club.

One is a group wanting to genuinely express their opinions and support democracy. The second group’s agenda is to provoke conflict.

However, both groups’ actions are against the law, he said.

“The country is now in an unstable situation. Martial law, which is the highest law, has been declared with harsh penalties for offenders,'' he said.

''We want people to be careful, and not oppose the law,” he added.

Col Winthai said the NCPO will have to enforce the law against those protesting against the NCPO.

But it will try to avoid clashes by arranging talks with the protesters first, and asking them to end their protests.

If negotiations are unsuccessful, the NCPO will have to use stronger measures on protesters to keep peace and order during this volatile period since the coup.

Meanwhile, Col Winthai added that detainees were in good health.

He declined to reveal their whereabouts and release date, but said they will not be detained for more than seven days.

“This is a sensitive issue. We want everything to be in order so we don’t want information surrounding detainees to be public knowledge,” he said.

Former prime minister Yingluck Shinwatra had been released, but was not authorised to give further details of her release.

He did not have the exact number of those detained or released because the NCPO keeps asking more people to report to it.

Those having no connection with the political situation could be released immediately. Otherwise, they may be detained for three to five days, or the maximum seven days.

Curfew hours remain unchanged from 10pm to 5am, he said.