The National Council for Peace and Order (NCPO) is still detaining 76 people who have turned themselves in, and has frozen the assets of four other people who defied its order to report to the junta leaders. 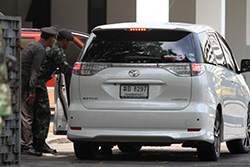 Army deputy spokesman Winthai Suwaree said on Wednesday that since the May 22 coup the NCPO had summoned 253 people, 200 of them had so far surrendered and 53 had not, including those who had reported reasons for their absence.

The NCPO is monitoring the behaviour of the released people and asks them to refrain from expressing political opinions. If they need to go abroad, they must inform the NCPO first.

Col Winthai said that Mr Chaturon's defiance of the NCPO's order was obvious before he was arrested and it would take time for his case to be tried in the military court.

The 1st Army and the Royal Thai Police Office were tracing people defying the NCPO's orders, he said.

Col Winthai said that if the summoned people agreed to join efforts to bring about national development, the country would benefit from their input.

He denied that former deputy prime minister Pracha Promnok was arrested. He said Pol Gen Pracha had been asked to surrender when he was overseas.

The deputy spokesman also said that the NCPO reduced the curfew from 10pm-5am to midnight-4am to help people get on with their lives, and if situation improves the curfew would be further reduced.