NCPO lays out stages to next poll
Thailand
Politics

NCPO lays out stages to next poll

Prayuth mum on how to deal with Thaksin

Gen Prayuth Chan-ocha, head of the National Council for Peace and Order (NCPO), has outlined three stages of national administration during the transitional period as the military junta prepares the country for a new election.

Gen Prayuth's plan was spelled out during his talks with regional army units and provincial offices of the Internal Security Operation Command via a video conference Thursday, said NCPO spokeswoman Sirichan Ngathong. (Story continues below) 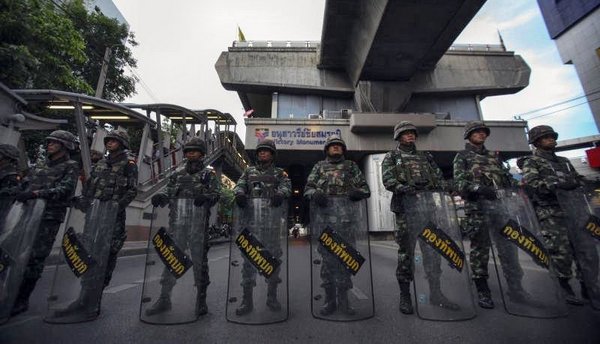 The junta has ranked stability and law enforcement as the top priority in the three-step road map that will restart democracy with an election. That presumably means more shows of strength like Thursday's shutdown of protests at Victory Monument. (Photo by Pattarapong Chatpattarasill)

The first stage on the road back to democracy and elections is to run the normal operations of the civil service while the second is to create an environment contributing to national reform, with the establishment of national legislative and reform assemblies.

This will pave the way for the third stage in which an election will be held to restore full democracy to the country, Col Sirichan said, adding that Gen Prayuth stressed the need for quick implementation of the three stages.

Col Sirichan also said Gen Prayuth so far had not talked about how to deal with former prime minister Thaksin Shinawatra.

Col Sirichan said Gen Prayuth wanted to ensure everything falls into place and it is not the time to talk about the past.

''When I am done tying shoelaces, I will walk straight away and will not look back,'' she quoted Gen Prayuth as saying.

Col Sirichan said the NCPO chief also emphasised that budget management must be fair and can respond to the needs of people and must not create financial burdens on future governments while fiscal and financial discipline must be maintained.

When decisions are made on any projects, public interest must come first, Col Sirichan quoted Gen Prayuth as saying.

Regarding the justice system, the NCPO chief wanted law enforcement to be strict and fair, Col Sirichan said.

The format of the NCPO chief's regular meetings with other agencies will resemble that of cabinet meetings, although a clear date has not yet been fixed, Col Sirichan said.

She said Gen Prayuth has attached importance to a means of communication with the public to inform them of the NCPO's work. A format for communication is currently being considered.

Col Sirichan also insisted the NCPO has no policy to close down all social media channels. The NCPO only targets websites seeking to cause divisions and insult the royal institution, she said.

NCPO spokesman Winthahi Suvaree said the NCPO has not yet considered appointing an interim prime minister and cabinet for the time being.

Former deputy prime minister MR Pridiyathorn Devakula, who is among a group of civilians and military officers appointed as NCPO advisers, said one of the advisory board's tasks will be to restore domestic and foreign investors' confidence.

The advisory board will present its policy recommendations to the NCPO via the NCPO's secretary-general, Gen Udomdej Seetabutr, MR Pridiyathorn said.

The advisory board met twice on Tuesday and Wednesday following its appointment on Monday, he said.

''At the meetings, the advisory board came up with lots of proposals, but they cannot be revealed until after they are approved by the NCPO,'' he said.

MR Pridiyathorn said advisory board members will not make public their policy recommendations until after they are approved by the NCPO.

Other members such as former finance minister and deputy prime minister Somkid Jatusripitak will advise on foreign affairs relating to China and Japan and legal expert Visanu Krua-ngam will advise on legal issues, MR Pridiyathorn said.

Yongyuth Yuthawong, a well-recognised scientist, will advise on social and psychological issues while Gen Noppadon Inthapanya will be responsible for public relations, MR Pridiyathorn said.

Meanwhile, the Anti-Corruption Organisation of Thailand plans to propose its main four reform proposals to the NCPO early next week with the intention of combating graft and ensuring transparency.