Protesters gather at Terminal 21 to air their opposition to the coup.

About 100 protesters gathered inside and outside the Terminal 21 mall at Asoke intersection on Sunday to demonstrate their opposition to the coup.

Protesters flash three finger signs signalling their opposition to the coup from inside the Terminal 21 mall. (Photo by Thiti Wannamontha)

The protesters from several factions and a number of individual activists showed up at about noon with anti-coup banners and made a three-finger sign as an anti-coup symbol before ending the rally at 2pm.

The sign represents liberty, equality and fraternity used by demonstrators to signal their stance.

A combined police and military force moved to the area about 20 minutes after the gathering. They were inside and in front of the department store and on the skywalk linking to the BTS. 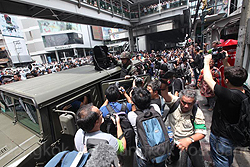 An army humvee joins soldiers and police forces to counter an anti-coup protest at Terminal 21. (Photo by Weerawong Wongpreedee)

It forced Terminal 21 management to close the mall and order customers out as scores of police and helmeted soldiers with riot shields took positions nearby. Two army trucks, including a Humvee mounted with a machine-gun, parked on a street outside, but moved away after crowds booed them.

The rally continued with no violence and only a stand-off between security forces and demonstrators. The crowd surrounded two plainclothes police officers who tried to detain one of the protesters. But after several minutes of shouting, the protester was released.

The venue for the rally was announced by Sombat Boon-ngamanong, leader of the Red Sunday Group, on his Facebook page.

"I am here because I don't want a coup. I want elections and democracy,'' said a 66-year-old female protester who asked to be identified only as Ratchana because of concerns over being detained.

''This is the 21st century,'' she said. ''There shouldn't be any coups, but they still keep happening ... because Thais are afraid'' to speak out. 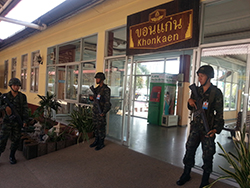 Soldiers guard the railway station in Khon Kaen province to prevent a protest against the coup. (Photo by Jakrapan Nathanri)

Winthai Suwaree, the deputy spokesman for the National Council for Peace and Order (NCPO), said the centre was closely monitoring anti-coup situations especially the one at Terminal 21.

The junta warned of arresting demonstrators for defying a ban on gatherings of more than five people if negotiations with them fail.

They will be sent to a military court and the punishment will be left to the court, Col Winthai said.

About 6,000 soldiers and troops were deployed in eight locations in Bangkok including Ratchaprasong area, which was the venue of the rally last Sunday, and Democracy Monument. Security authorities in other provinces stepped up measures but there were no reports of major rallies.

Police on Sunday detained a woman in the Pratunam area after she was seen demonstrating alone at Ratchaprasong intersection where a number of officers had been deployed to handle anti-coup protesters.

The lone protester showed up at Ratchaprasong intersection at about 10.40am. She was wearing a mask with the word "people" printed on it.

Police tracked her and detained her at the Pratunam intersection. She was taken to Lumpini police station for violating the NCPO's decree on anti-coup protests.

The woman, who has not yet been unidentified, said she was an ordinary citizen who had done nothing wrong.

A woman was forced into a taxi by suspected plainclothes police officers after she allegedly flashed three-finger signs signalling her opposition to the coup near Asoke BTS station on Sunday, June 1, 2014. (Video by Chumporn Sangvilert)