The military's National Council for Peace and Order (NCPO) is having a headache clarifying whether a person flashing the anti-coup three-finger sign is guilty, should be arrested and such gesture is doable.

Army deputy spokesman Col Winthai Suwaree said the NCPO would first look at the intention of those holding up three fingers — a gesture from the Hunger Games movies used as an anti-coup symbol — before deciding on what action to be taken. 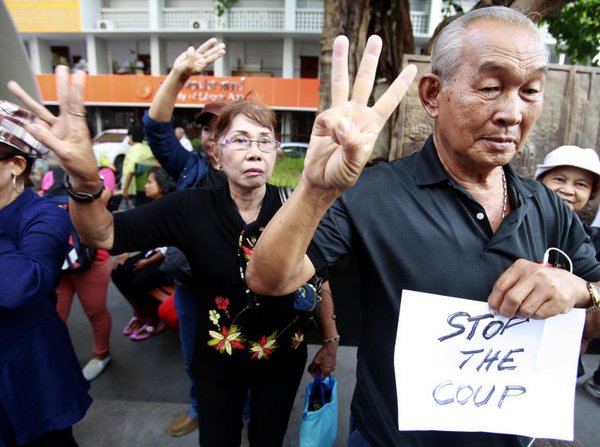 These anti-coup protesters on Sunday afternoon near Thammasat University used the same three-finger "salute" adopted in protests near the Asoke intersection. (Photo by Thanarak Khunton)

He was responding to questions regarding the latest anti-coup symbol by Wassana Nanuam, Bangkok Post military affairs reporter.

“[The NCPO] must look at their intention, what they want to communicate and surrounding circumstances,” Col Winthai said.

Contrary to the motion pictures' use of the sign to mean respect, anti-coup activists are using it to represent "liberty, equality and fraternity", the French national trinity.

Military officers usually used compromise and negotiation with the protesters, said Col Winthai, but they would enforce the law and make arrests if find it necessary.

Six people, four of them women, have been arrested for allegedly violating martial law during anti-coup gatherings in the Ratchaprasong and Asoke areas and outside Fortune Town shopping mall over the weekend.

Military prosecutors had not decided yet whether to indict them, Col Winthai said, adding the group, if indicted, would be tried in a military court.

Soldiers on Monday questioned the six and sent them to Crime Suppression Division (CSD) for background checks and having their cases put in a daily record. They are being detained there pending further legal proceedings.

According to the NCPO, violators of martial law found to have violent behavior, resist or obstruct security officers would be prosecuted. Those defying it in a peaceful manner would be held for seven days and released.

A total of 25 protesters have been detained at the CSD, 16 of which were set free, after the army enforced martial law on May 20.