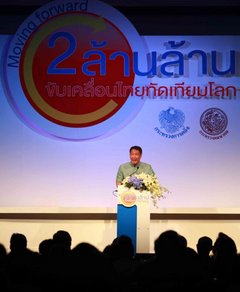 Former economy czar Kittirat Na-Ranong strongly pressed for passage of funding for the project last July, but the megaproject died after parliament was dissolved in December.

Other elements of the spending are likely to be reviewed, after National Council for Peace and Order (NCPO) chief Gen Prayuth Chan-ocha ordered state agencies to discuss the best ways to spend budgets secured by the past administration.

These include the controversial two-trillion-baht transport development project and the 350-billion-baht water management scheme.

On Monday, Gen Prayuth chaired a meeting of his seven deputies and the National Economic and Social Development Board (NESDB) to discuss ways to help the economy after months of protests threatened to derail growth.

Gen Prayuth has ordered agencies to study which projects under the 2-trillion-baht transport overhaul would most help the public, Col Nathawat said.

The projects’ environmental impact assessments and transparency must be taken into account.

They also must undergo public hearings before they start.

The NCPO chief had authorised state agencies to conduct cost-benefit analyses of four high-speed train projects from Bangkok to Nong Khai, Bangkok to Chiang Mai, Bangkok to Rayong and Bangkok to Hua Hin.

The four high-speed train projects, worth 800 billion baht, were part of the two-trillion-baht borrowing bill ruled unconstitutional by the Constitutional Court in March.

If the NCPO decided to go ahead with the high-speed trains, they would most likely be paid for as a joint investment between the public and private sectors, with funding support from domestic sources, he said.

The NCPO would move ahead with the dual-track railway development project, which should start this year, he said.

Col Nathawat said the NCPO also plans to call a meeting with former transport minister Chatchart Sittipunt, as he could help supply the details needed.

In response to the offer, Mr Chatchart sent a Line message to reporters Monday saying he would be pleased to lend his support to the NCPO.

He also said the military could help with dredging work to speed up the projects.

As for the companies chosen by the last government to handle the water management projects, the NCPO has yet to look into the matter, Col Nathawat said.

“The NCPO attaches importance to water management in line with the royal initiatives, such as building water catchment areas known as 'monkey cheeks' to hold flood water, and the dredging of canals,” said Col Nathawat.

“The military can take part in the 4,000 dredging projects for villages nationwide at a cost of 10 million baht each. This could help contain water and prevent floods.”

Col Nathawat said the military took part in many past government projects, which helped keep costs down and ensured they met deadlines.

The deputy spokesman said Gen Prayuth instructed state agencies to feel free to call him any time if they had doubts about his instructions.

Meanwhile, ACM Prachin said Thailand is in a strategic location for regional transport development which should be planned carefully to boost travel and logistic needs.

It is important for Thailand to build additional links with the other Asean nations in all directions, he said.

Upgrades to ports, airports, and train stations are also needed to provide convenience to passengers, he said.

Meanwhile, Gen Prayuth has ordered Budget Bureau director Somsak Chotratanasiri to report to the NCPO details of projects in the 2014 fiscal year for which budget disbursements were behind schedule, so spending can be sped up.

The NCPO wanted spending to be sped up to help stimulate the economy, Col Nathawat said.

The National Economic and Social Development Board Monday also briefed the NCPO on the 11th national social and economic development plan.

NCPO spokeswoman Sirichan Nga­thong said Gen Prayuth asked the NESDB to change the plan by addressing ways to improve the happiness index among Thais, assist the underprivileged and boost income distribution among the people.

She said the NCPO chief had also assigned the Tourism and Sports Ministry to recommend tourism areas where martial law could be lifted.

Gen Prayuth wanted to ease the restrictions in areas where the problem of political divides no longer existed, she said.

Phuket and Koh Samui in Surat Thani could be among these areas, the spokeswoman added.