Yes, they can catch Sombat

His defiant "catch me if you can" Facebook posting finally came home to haunt Sombat Boonngam-anong, who was arrested in Chon Buri province on Thursday night. 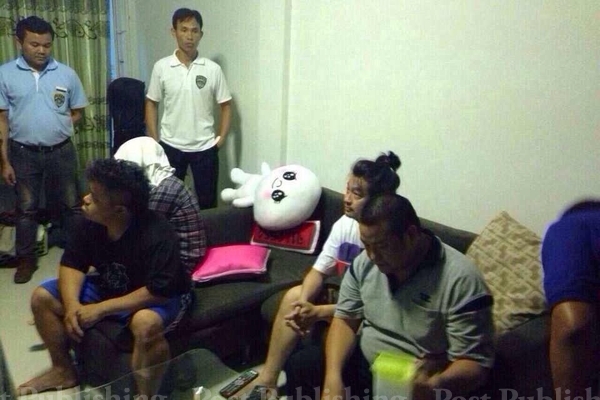 A combined team of police and soldiers raided a house in Phan Thong district at 9.30pm and arrested one of the most wanted anti-coup activists, a man who defied the order of the National Council for Peace and Order to report to junta officials at the army auditorium on May 23.

"I have been arrested," he posted on Facebook, making public his demise on Thursday night.

Just one hour before that he had posted another message telling his followers that he would go to see a doctor on Friday, and said they should not be ''shocked'' if he did not post on Friday.

He regularly connected with his followers and people opposed to the coup though the social media.

A message on Sunday told demonstrators that a planned rally would be moved from Amarin Plaza near Ratchaprasong intersection to Terminal 21, a shopping mall near Asoke intersection. A week earlier, he urged coup opponents to show up at Amarin Plaza. Mr Sombat was not at either of the two rallies. 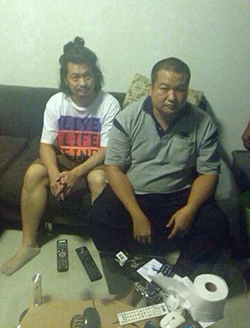 Sombat Boonngam-anong, left, sits with a man who is not identified after security authorities raided the house where he was staying in Chon Buri province on Thursday night. (Police photo)

Pisit Pao-in, chief of the Technology Crime Suppression Division, said on Friday authorities traced his whereabouts from his Internet Protocol (IP) address. That was the end of his ''catch me if you can'' taunt.

He posted the message shortly after the NPCO order naming him was publicly announced, saying he would not report in as ordered.

There were four men and one woman at the house where he was hiding, according to Pol Maj Gen Pisit. The house owner was Mr Sombat's friend, he said.

Authorities had closely followed his postings before they were finally certain where he was staying, he added.

The National Intelligence Agency is believed to have been involved in the operation.

Soldiers from the 21st Infantry Regiment took part in the raid. Mr Sombat was taken from the house to a military camp in Muang district of Chon Buri, where he was being held.

Phan Thong police were not informed in advance about the raid, Pol Maj Gen Pisit said.

On June 4 soldiers and police raided La Paloma Hotel in Phitsanulok's Muang district, searching for him but instead they found a gambling den - so they shut it down.

Mr Sombat said after the Phitsanulok operation that he had never been to the hotel and questioned the authorities' competence.

''Didn't intelligence officers know that I wasn't there and that a gambling den was there?'' he said on Facebook on that day.

He suspected the authorities just wanted to close the gambling den run by an influential figure in the province, and used his name as an excuse.

The core member of the Red Sunday Group orchestrated peaceful rallies against the military coup in 2006. He openly opposed the military's seizure of power by army chief Gen Prayuth Chan-ocha and urged people to come out to show their opposition to it.

He will be taken to a military court. If convicted of disobeying the NCPO's order, Mr Sombat faces up to two years in prison and/or a 40,000 baht fine. He could also face other charges.

His last message on YouTube, released after his arrest, encouraged people to continue peaceful rallies against the coup. The video was pre-recorded, to be posted by a friend if he was caught.