Junta finally catches up with Sombat

Sombat Boonngamanong was arrested shortly after he told the Bangkok Post that he was confident he could evade the junta. 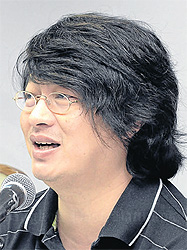 He made the comments in an interview on Wednesday afternoon, the day before he was arrested on Thursday night at a house in Phan Thong district of Chon Buri.

During the interview, it was clear that the anti-coup activist was unaware the authorities were closing in on him.

“They cannot arrest me if I do not show up by myself. I am living in the place where I have enough noodles to eat for several months, close to a 7-Eleven. I'll be able to eat salapaos [Chinese buns] for my brunch everyday,” he said humorously.

Mr Sombat had earlier challenged the the National Council for Peace and Order (NCPO) to apprehend him by posting the message “Catch me if you can” as the cover photo on his Facebook page.

Following the interview, he posted on Facebook asking his friends if they thought he would be arrested or not.

“Yesterday [Wednesday], a reporter asked me how confident I am that I will not be arrested. I answered that [I am] very confident because I am staying in the place where I have Mama [instant noodles] to eat for months. However, the police told the reporter that they are confident that they can arrest me soon as well. I want to ask you guys, what do you think?”

He explained that his message “Catch me if you can” was just his way of taunting the coup makers.

“They are playing their game, so I have to play my game,” he said.

Mr Sombat also explained that he was hoping that the international media would pick up on his anti-coup campaign.

“Coups destroy laws," he said. "Many orders from the NCPO have also eliminated people’s rights and centralised power."

Mr Sombat said he wanted his campaign to tell the world that Thai people do not want a coup.

“At this point I am trying to make Thais and the international community realise that people do not want a coup. The next step to get people to reject a military-installed council will be a big challenge. I may need time, maybe a month,” he said.

On Thursday, when the Bangkok Post spoke to him again just before his arrest, he explained his short-term plans.

“I have no plan for any immediate activities outside of our online campaign. The movement in the cyber world is the best way at the moment. We always do our campaigning through the internet.”

Soon after the call, he posted on his Facebook, “I have been arrested”.

Pisit Pao-in, chief of the Technology Crime Suppression Division, said that authorities had traced Mr Sombat using his Internet Protocol (IP) address. When authorities raided the house where he was hiding, they found him with four men and one woman. The house owner was Mr Sombat’s friend, Pol Maj Gen Pisit said.

The National Intelligence Agency is believed to have been involved in the operation.