World condemnation of the military is not being matched in the business sector - Anti-government leader Suthep has been keeping a low profile since the coup - The Mcot chief wants to quit in protest over a dodgy contract, but may not be allowed

The May 22 military coup has brought back hope for many people as it ended the six-month political deadlock and turmoil that inflicted huge damage on the country. 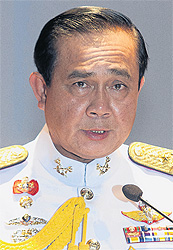 For the coup supporters, the putsch pulled the country back from the brink. Many believe the coup makers led by army chief Gen Prayuth Chan-ocha are showing good intentions about restoring democracy and steering the country forward.

They insist the brand of democracy practised in Thailand is seriously flawed as it focuses only on voting and elections while discarding the true spirit of democracy, which puts the interests of the people, not the majority of people, first.

Many Thais believe the coup may be a blessing in disguise.

It provides a chance to "get the house in order" and transform the country’s political system from a half-baked democracy to a fully fledged one, according to coup supporters.

However, their views are countered by strong messages against the coup sent by many Western governments which have scaled back aid and cooperation with Thailand since May 22.

Right after Gen Prayuth seized power from the caretaker government, diplomats from 58 countries with embassies in Thailand and representatives of international organisations were invited to hear what the coup makers had to say about the reason for staging the coup.

However, ambassadors of some countries did not show up. They only sent lower-level envoys to the meeting held by the coup makers. Only the Chinese and Russians sent their ambassadors to be present at the meeting.

An expert on foreign affairs noted that it was a pity that the ambassadors from some western countries did not have a private meeting with Gen Prayuth, especially as China and Russia are establishing cordial relations with Thailand.

The political source said Gen Prayuth should consider asking the Chinese government to encourage Chinese tourists to come back to Thailand to boost the shaken tourism industry after dozens of countries issued travel advisories for their citizens planning on visiting the country.

The source said the military junta must show the US and other countries opposing the coup that they cannot push Thailand around as they wish.

They must be made to realise that engagement and cooperation with Thailand is necessary and that they are ill-advised to scale back aid and downgrade ties with Thailand.

At the same time, the source stressed the need for the military junta to step up an international public relations blitz to convince the West of its efforts to pursue unity, reform and return electoral democracy to the country.

Another source in the economic sector said so far, it has been business as usual on the commercial and trade levels between western countries and Thailand. The businesses do not wish to see themselves edged out of their dominance of lucrative markets.

The source said international business operators are closely watching top-level political decisions from both Thailand and the West and are hopeful the steps the countries make will not end up putting their businesses in dire straits.

Out of the limelight 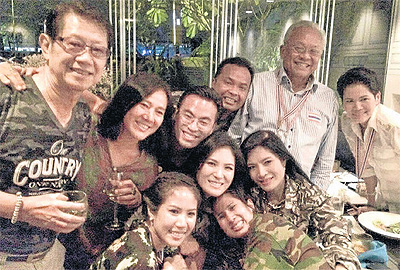 A birthday celebration after the coup by PDRC members in battle fatigues was not well received.

From political rally stage to the military barracks and now back home, the roller coaster ride for Suthep Thaugsuban has finally ended. Or has it?

The People’s Democratic Reform Committee (PDRC) leader has emerged from military detention in the pinkest of health, apparently having eaten and slept well under the care of the boys in green.

Since his release late last month, he has been visiting PDRC members injured and maimed during the six-month long protests in and outside of Bangkok. He has also handed over PDRC funds donated by supporters to the families of those who perished during and as a result of the protests.

He and other PDRC core leaders have slipped away from the limelight of late, particularly after the Bluesky satellite channel was taken off air on the orders of the National Council for Peace and Order (NCPO).

Bluesky and a host of other satellite television stations — deemed by the military to have helped to incite passions during the political conflict — were ordered to suspend broadcasting soon after martial law was declared a few days before the coup was staged on May 22.

Mr Suthep became almost a permanent fixture on the Bluesky screen, pulling in a raft of PDRC viewers who abandoned the mainstream channels and stayed glued to the station.

Before the PDRC rally on Ratchadamnoen Avenue was dispersed at the onset of martial law, Mr Suthep made it clear the committee’s goal must be realised no matter what.

The goal is to turn national reform into reality, which Mr Suthep contends should have nothing to do with politicians.

He also envisioned a government of politically neutral people and a so-called “people’s council” to get the reforms rolling. The national assembly also has to be established to amend laws which are highly instrumental towards reform.

The pictures Mr Suthep visualised in his head are slowly falling into place, according to observers.

There has been much speculation about whether national reform, which sits among the NCPO’s top priorities, will reflect what Mr Suthep hoped to attain before the PDRC rally abruptly ended.

Some people are also curious as to whether Mr Suthep will be approached for advice on the reforms, which would keep him busy in the post-rally era.

The observers, however, caution the PDRC secretary-general and other core leaders against having a role in the reform or the national assembly. The current political precariousness, where anti-coup protests have cropped up here and there, could backfire on and possibly weaken the PDRC if the movement is perceived as being one and the same with the military.

A recent private birthday party thrown for Natthapol Teepsuwan, one of the core leaders of the PDRC, struck a sensitive nerve with some people, including PDRC sympathisers, who viewed images of the happy event on Facebook. Some party-goers were clad in attire resembling military fatigues as the wine flowed and long-stemmed glasses clinked.

The responses to the party prompted Mr Natthapol to clarify the matter, saying it was a private gathering and that some people had an ulterior motive in trying to politicise the event.

A tough time to resign

Prior to the May 22 coup, Anek Permvongseni was preparing to step down as the president of Mcot Plc, a state-owned broadcasting enterprise, next week. 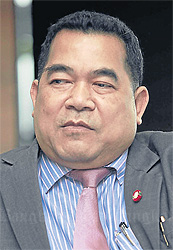 Anek: Cleaning up the mess

Mr Anek is believed to have decided to call it quits because of pressure that had come from political intervention — a problem that has long bedevilled state enterprise boards.

Mcot in particular has been a central focus of this speculation as it has had four presidents and three acting presidents in the past decade, most of them not having completed their terms.

Mr Anek has been in office for just 20 months.

The issue which is said to be troubling the organisation is its pending procurement of a multi-million dollar digital TV network equipment package, which is key to its business plans.

The operator of Channel 9 has won licences to run two digital channels — children’s channel Mcot Family and a high-definition (HD) variety channel — and is one of four digital TV network providers.

Any delay in the procurement is likely to affect Mcot’s digital TV network service, which may not be finished in time under the requirements of the country’s broadcasting regulator and for its network clients including Voice TV, Spring News and Thai Rath TV.

The equipment purchase is said to have the blessing of the Mcot board. Mr Anek however, has been reluctant to sign the procurement.

A question of transparency may have stopped him from proceeding with the deal. The procurement committee has concluded “the specifications do not match the terms but they would not undermine broadcasting operations”.

Critics allege the equipment specifications have been written to favour a private firm with affiliations to a powerful political family.

Mr Anek was heard to say he would be “signing his own death warrant” if he signed the contract.

With the procurement committee’s finding, the deal would not escape the prying eyes of the National Anti-Corruption Commission or the Auditor-General's Office.

His stance has upset the board which included the project in its assessment of Mr Anek’s performance.

The board appeared to win the conflict when the president tendered his resignation, claiming health problems could affect his work and company operations. Before the resignation took effect, Mr Anek took sick leave. But this was cut short a week later by the military.

Mr Anek was reportedly contacted by a senior officer in the National Council for Peace and Order (NCPO) and “asked” to suspend his resignation, cancel his sick leave and go back to work.

He subsequently submitted another letter to the Mcot board asking it to review his resignation. The board called an urgent meeting last Tuesday and resolved to consult the Council of State on the issue.

According to political observers, with the NCPO totally in charge of national administrative affairs, it is just a matter of time before Mr Anek’s resignation request is declared void.

With politicians’ appetite for intervention in state enterprise boards likely to be curbed by the coup makers, the Mcot president is expected to use the opportunity to not only scrap the procurement but also clean up other messes, according to a source in Mcot.