The military junta has denied ordering the mass expulsion of Cambodian workers, as reports of extortion and abuse filtered in from the tens of thousands of migrants fleeing across the border. 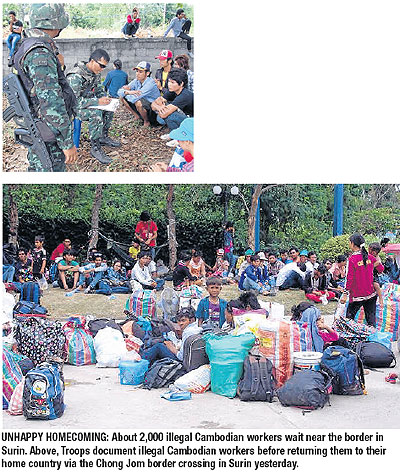 Almost 40,000 Cambodians left Thailand on Friday alone and another 6,000 tried to leave yesterday morning, according to the International Organisation for Migration (IOM) Asia-Pacific. Some 60,000 have poured over the border in the past seven days.

Large numbers are fleeing via the main Poipet border checkpoint, according to IOM, which has deployed staff members at the border.

Many are effectively stranded, with no money to pay for onward transport to reunite with their families. Some told stories of intimidation and the threat of abuse at the hands of their employers and authorities.

“Our employer gave us a choice: go home now, or stay and face the soldiers who may arrest or even shoot you,” construction worker Thai Phoun, 28, told the Phnom Penh Post newspaper.

Another worker, 35-year-old Kim San, said: “They came to pick up all 300 workers from our [construction] site. First they took our luggage, and then they took us.

“They detained us and told us we would have to pay 300 baht each to get out. When we got [to the checkpoint] police threatened us with sticks, telling us to form a line. They treated us like that.”

As more migrants continued pouring across the border yesterday, the Cambodian government sent about 300 military trucks to help transport those who have crossed back from Thailand to their home towns.

The National Council for Peace and Order denies it has any policy to evict Cambodian migrants and has rejected accusations of abuse. It suggested many of the migrants are simply leaving to farm rice in their home country.

NCPO spokeswoman Patamaporn Rattanadilok Na Phuket said the junta had no policy to crack down on Cambodian workers, although it had set up a committee to review immigration policies for foreign workers.

Ms Patamaporn said the NCPO acknowledged there were “rumours” spreading about a junta crackdown on migrant workers, and that this was likely prompting employers to panic and send migrants back home.

She said coup leader Prayuth Chan-ocha had ordered authorities to assist the return of Cambodian workers, insisting he wanted them to arrive back safely.

Sa Kaeo governor Pakkathorn Thienchai said as many as 15,000 Cambodians had returned home via the Aranyaprathet district border crossing over the past few days.

Cambodian Foreign Ministry spokesman Koy Kuong said Thailand routinely repatriates Cambodians found to be working illegally, but the number of people crossing the border over the past few days was “overwhelming”.

Sam Rainsy, leader of the opposition Cambodia National Rescue Party, wrote a letter to Gen Prayuth on Friday, saying he was shocked by the allegations of abuse against Cambodian workers.

Sam Rainsy also said Cambodians who have returned home reported violent raids on the homes of suspected illegal migrants and incidents of the tearing up of documents that allow Cambodians to work legally here.

“News of this kind is very distressing and frightening from a humanitarian point of view,” Sam Rainsy said in the letter.