Suthep in talks with Prayuth ‘since 2010’
Thailand
Politics

Suthep in talks with Prayuth ‘since 2010’

People’s Democratic Reform Committee leader Suthep Thaugsuban has been advising the junta chief on how to unseat the Thaksin regime since 2010, Mr Suthep revealed at the weekend. 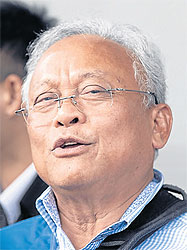 Suthep: We still chat on Line

He admitted for the first time he had discussed with the coup-maker Prayuth Chan-ocha strategies to root out the influence of former prime minister Thaksin Shinawatra and his allies since the 2010 political violence.

Mr Suthep broke his silence at a fund-raising dinner on Saturday night at the Pacific Club in Bangkok.

His remarks suggest Gen Prayuth has been actively plotting to bring down former prime minister Yingluck Shinwatra, including the period leading up to the coup when she was defence minister.

The protest leader spoke to almost 100 PDRC supporters at the dinner under the theme “Have dinner with Kamman Suthep” about the motives behind the military’s power seizure.

He said he chats regularly to Gen Prayuth and his team via the Line chat app.

“Before martial law was declared, Gen Prayuth told me ‘Khun Suthep and your masses of PDRC supporters are too exhausted. It’s now the duty of the army to take over the task’, ” Mr Suthep said.

He had consulted Gen Prayuth since the 2010 political unrest on how to root out the so-called Thaksin regime and join hands to reform the country, fight corruption and dissolve colour-coded politics that divided Thais.

“We spent almost 1.4 billion baht on our movement over the past six months. Of the money, 400 million came from the families and allies of protest leaders. Another 1 billion baht was from cash donations from our supporters, the PDRC leader said.

Mr Suthep earlier postponed the fund-raising dinner to help PDRC demonstrators injured during the rallies against the government as he did not want to put the NCPO in a difficult situation due to the declaration of martial law.

The group had now set up a foundation to push for national reforms. Participants in the fund-raising dinner donated money to a foundation start-up fund.

Mr Suthep said the PDRC would hold dinners every Saturday and he would use the Pacific Club as the foundation’s office. He vowed not to return to politics.

The foundation would help injured demonstrators and the families of dead victims, and also put forward PDRC proposals to the military.

“From now on, we will function like a non-governmental organisation that will carry out research. We will have no links with any political party,” Mr Suthep said.

Over the past months, the military was aware of the PDRC’s objectives as the group stepped up pressure on civil servants and soldiers to join the movement, he said.

The military had adopted several PDRC proposals such as measures to help farmers. He called on his supporters to back the military.