Gen Prayuth Chan-ocha has denied having talked or exchanged messages in private with Suthep Thaugsuban ahead of the May 22 coup. 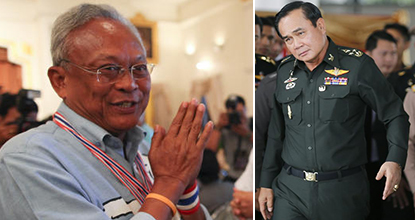 Mr Suthep, leader of the opposition forces against the Yingluck Shinawatra government, said at a fundraising dinner during the weekend he had been advising the junta chief on how to unseat the Thaksin regime since 2010.

Mr Suthep said he chatted regularly with Gen Prayuth and his team via the Line chat app and that Gen Prayuth told him shortly before martial law was announced it was now time for the army to take over the task.

Winthai Suwaree, deputy spokesman of the National Council for Peace and Order (NCPO), said Gen Prayuth told him clarify inconsistencies in the report.

"He said as leader of a security force, he had been assigned by the then government to persuade all groups to negotiate, a feat that had never been achieved," he said.

"Yingluck Shinawatra, the government at the time, instructed the army to warn all groups to avoid breaking the law and protect the people," he said.

"As chief of a security force whose duty is to comply with the law and state policy, Gen Prayuth could not have done so [talked to Mr Suthep confidentially].

According to sources, Gen Prayuth was "very upset" with Mr Suthep as the atmosphere is improving.