A former chief security guard of the People's Democratic Reform Committee (PDRC) who allegedly committed a series of assaults in April during anti-Yingluck Shinawatra protests has been arrested. 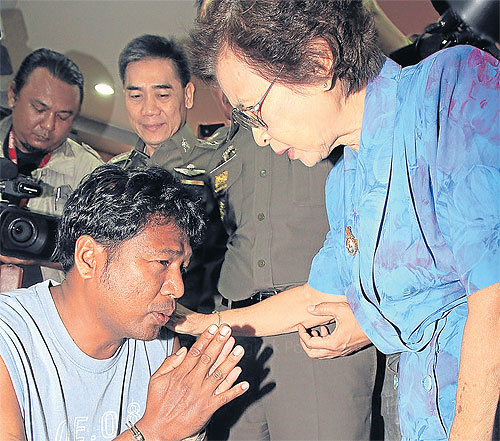 Anon Klinkaeo, former chief guard of the People’s Democratic Reform Committee protest group, apologises to the mother of Col Witthawat Wattanakul who was allegedly shot and assaulted by PDRC guards near their rally site on Chaeng Watthana Road in April 25. Tawatchai Kemgumnerd

Mr Anon, from Samut Sakhon, is facing three charges in connection with a series of assaults he allegedly committed against state officials during protests in front of the Government Complex in Chaeng Watthana.

In the first case, on April 22, he and some other guards allegedly threatened a police officer on security duty at a petrol station on Chaeng Watthana Road with a gun and then stole the officer's handgun.

In the second case, on April 24, Mr Anon and other guards allegedly shot and injured Col Witthawat Wattanakul, deputy director of the International Relations Division under the Directorate of Joint Intelligence, when he removed traffic cones inside the Government Complex to get back home.

In the third case, Mr Anon allegedly assaulted a police officer who was on his way to a meeting at the police club.

Mr Anon fled Bangkok after warrants were issued for his arrest.

Metropolitan and Region 9 Provincial police learned Mr Anon had been hiding out in various locations before he was arrested on Wednesday, more than one month after the coup put an end to the PDRC's anti-government protests.

Mr Anon, who was taken to a press conference, apologised to Col Witthawat's mother, Bangonrat. He denied attacking Col Witthawat but apologised on behalf of PDRC guards.