Inspections of rice stocks have turned up problems with the storage of pledged rice in 12 provinces, with vast amounts missing, rotten, or infested with weevils, the head of the team inspecting storage warehouses says. 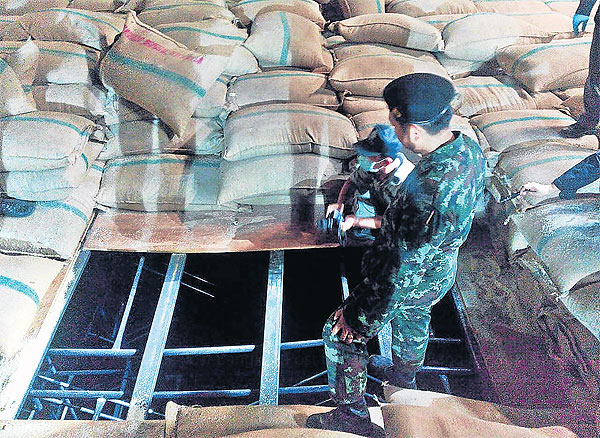 Military personnel find scaffolding instead of rice sacks in the middle of a warehouse in Pathum Thani’s Muang district. The disappearance of 91,000 sacks of rice under the pledging scheme was confirmed during a re-inspection yesterday. PONGPAT WONGYALA

At other warehouses, piles of rice sacks were in a disorganised state, with rotten and adulterated grain, weevils in the sacks, some rice rotten, some turned to powder, and some of the grain water damaged, ML Panadda said.

He said the findings will be reported to the National Council for Peace and Order (NCPO). The 12 provinces include Suphan Buri, Surin, Amnat Charoen, Kamphaeng Phet, Nakhon Ratchasima and Ubon Ratchathani.

According to criteria set by the inspection team, a police complaint can be made only when more than 5% of rice is missing from stocks, ML Panadda said, adding that a check at one warehouse found about 7% of the rice was unaccounted for.

He said officials from the Public Warehouse Organisation will be responsible for filing complaints asking police to investigate irregularities relating to rice stocks.

He said that at this stage he could not tell which province had the largest amounts of rice missing.

ML Panadda said that rice stock checks  entered their third day yesterday and inspections will continue over the next several weeks before the final findings can be revealed.

He said any state officials found guilty of being involved in the disappearance of rice stocks will face punishment and the inspection teams will also report this to the NCPO.

Former Democrat MP Warong Dechgitvigrom, who blew the whistle on massive losses and corruption in the rice-pledging scheme, wrote on his Facebook page that the inspections over the past few days showed the previous Yingluck Shinawatra government had failed to stem the losses.

Phongchai Kasemthaweesak, head of the rice inspection team which examined rice in Buri Ram's Phutthaisong district, said a check of more than 20,000 sacks of Hom Mali rice had not yet found anything suspicious, although about 1% of it had turned yellow.

Meanwhile, two senior commerce officials were transferred to inactive posts at the Commerce Ministry in what is being seen as a first step to address the rice-pledging fiasco, a ministry source said.

The shift of Mr Surasak and Mr Somchart comes shortly after the coup-makers appointed Chutima Bunyapraphasara as the new permanent secretary to replace Srirat Rastapana.

The transfers come as no surprise as the duo lack backgrounds in the rice trade.

They do not have rice trade experience while the Foreign Trade Department and the Internal Trade Department play a significant role in the disposal of the government's rice stocks, the source said. Both have been accused of serving politicians instead of the public interest.

Ms Duangporn and Ms Jintana are known to have expertise in the rice trade. Ms Duangporn served as the director of Bureau of Rice Trade Administration of Foreign Trade Department while Ms Jintana, who is currently in charge of rice stock inspections, served as director of the Bureau of Agricultural Trading Promotion.

According to the source, Ms Duangporn and Ms Jintana will be working in an acting capacity until an interim government is formed. The appointments of director-generals must be endorsed by cabinet. 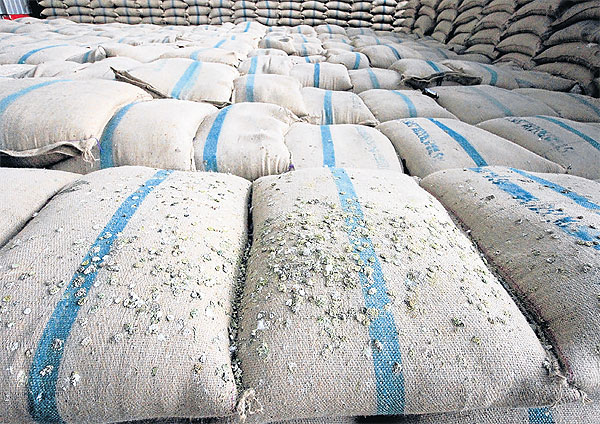 Bird and rat droppings as well as bird feathers are found scattered on piles of rice sacks in a rice warehouse in Ayutthaya’s Phachi district during authorities’ inspection yesterday. SUNTHORN PONGPAO

SONGKHLA: A fugitive army ranger has surrendered to face charges of shooting dead his wife and mother-in-law at their home in Saba Yoi district on Thursday night.