Critics slam overzealous use of lese majeste since putsch

A surge in the filing of lese majeste charges following the May 22 coup has raised concerns that more lawsuits will only undermine political reconciliation sought by the junta, critics say. 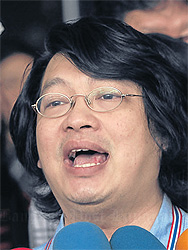 Sombat: ‘Law will cause more harm’

At least 13 people have been arrested or charged with lese majeste under the Criminal Code’s Section 112 since the coup took place.

Other high-profile people facing lese majeste charges who have had arrest warrants issued for them but have failed to report in include a hairdresser based in England, Chatrawadee Amornphat; former PM's Office minister in exile Jakrapob Penkair; and Thammasat University historian Somsak Jeamteerasakul.

Mr Sombat said tackling the lese majeste charges with a "blunt legal weapon" would only cause more harm to the monarchy.

“Clearly, the police have adopted the NCPO's [directives] as a policy to conduct surveillance and proceed with lawsuits. But under the current fragile situation the authorities should instead expedite communications [with people targeted] and fine-tune procedures as has been the case in the past several years,” he said.

He was also concerned for the lese majeste suspects who have not been granted bail.

Niran Pitakwatchara, a member of the National Human Rights Commission, said the increase in lese majeste charges and lawsuits has been an issue of concern for several years. He said the application of Section 112 of the constitution on lese majeste proved problematic as it was, in many cases, politically motivated, which only complicates the political conflicts.

“The more arrests and charges are made, the more the revered institution will be politicised,” he said.

Surapol Eiamsuwan, 52, father of engineering student Akaradet, said he would like to ask the junta to be more careful that it does not give out the wrong signals. The policy which places emphasis on the enforcement of the lese majeste law has now been rigidly and narrow-mindedly applied, he complained.

“It’s easy for people who have different opinions about politics to be attacked and abused with regard to the application of Section 112. My son only wrote comments on Facebook against the person who was politically hostile [to him], not against the monarchy,” he said.

Tyrell Haberkorn, a fellow at the Australian National University’s political and social changes department, said by placing the prosecution of cases connected to the violation of Section 112 in military courts, where there is no appeal and rights to legal protections are limited, the junta is walking a fine line between continuing with the constitutional monarchy and returning the country to an absolute one.

The rise in the number of charges filed under Section 112 since the coup, and the corresponding expansion of its use as a threat to silence speech and comment, are of grave concern, Dr Haberkorn said.