The National Anti-Corruption Commission (NACC) has decided to recommend former prime minister Yingluck Shinawatra be indicted for dereliction of duty in failing to deal with corruption and losses in the rice-pledging scheme.

Ex-premier Yingluck Shinawatra has been given permission by the military council to fly to Europe, presumably to attend next week's 65th birthday party for her brother Thaksin in Paris. (AFP file photo)

The decision has raised questions over whether or not Ms Yingluck will flee into exile or return to Thailand to face charges since she has already obtained permission from the National Council for Peace and Order (NCPO) to travel to Europe next week.

NACC member Vicha Mahakhun said Thursday the commission ruled by a vote of 7-0 there are sufficient grounds to the allegations that Ms Yingluck was negligent in failing to scrap the pledging scheme despite knowing it was plagued with corruption and huge losses.

This would be in violation of Section 157 of the Criminal Code and Section 123/1 of the National Anti-Corruption Act. 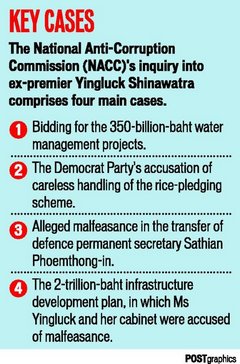 Ms Yingluck chaired the National Rice Policy Committee when she was premier.

The NACC will forward the case to the Office of the Attorney-General, recommending Ms Yingluck be indicted in the Supreme Court’s Criminal Division for Holders of Political Positions, Mr Vicha said.

He said an NACC inquiry had found that the rice-pledging scheme was riddled with corruption at every level, such as the rigging of weighing scales, unauthorised moving of rice stocks from storage warehouses, secret rice auctions, and cronyism.

He said this case was primarily focused on Ms Yingluck, adding that the NACC will continue investigating other people suspected of being involved in the scheme's alleged irregularities.

Meanwhile, questions have been raised as to whether Ms Yingluck will ever return to Thailand from her planned trip to Europe next week.

Ms Yingluck previously wrote to NCPO chief Prayuth Chan-ocha to request permission to leave the country for a holiday to Europe with her son from Sunday to Aug 10.

It has been speculated that she will travel to France to attend a birthday party for her elder brother, former prime minister Thaksin Shinawatra on July 26.

A source close to Ms Yingluck confirmed she will be travelling to France and Britain, as well as the US.

But former senator Somchai Sawaengkarn, a member of the anti-Thaksin Group of 40 Senators, said on his Facebook page that he did not think Ms Yingluck would flee the country to escape the case.

She will probably return to Thailand to fight the case, which will take quite some time, and the circumstances could change when the NCPO steps down from its role after an election, Mr Somchai said.

He also noted that many of Ms Yingluck's assets remain in the country.

Given the value of her assets, she could not afford to flee into exile, Mr Somchai said.

Mr Somchai also said that the NACC will propose legal amendments to the National Legislative Assembly to extend the statute of limitations in corruption cases to 30 years and revive expired cases.

This means if Ms Yingluck does not return to Thailand, she will have to remain in self-imposed exile probably for the rest of her life and she will have her assets seized, her passport revoked or could face extradition, Mr Somchai said.

Her brother, Thaksin, who has remained in self-imposed exile, fled a two-year jail term handed down in October 2008 by the Supreme Court's Criminal Division for Holders of Political Positions after it found him guilty of abuse of authority for helping his wife win a bid for a Ratchadaphisek property.

The sentence was given in his absence.

Thaksin fled the country after receiving bail to attend the opening ceremony of the 2008 Olympics in Beijing.

Former Democrat MP for Bangkok Atthawit Suwanphakdi said there was a risk that Ms Yingluck would not return to Thailand.

He said Ms Yingluck previously tried to delay the NACC probe by asking for additional defence witnesses, which the NACC dismissed as unnecessary.

Mr Atthawit said if she fails to return, public prosecutors cannot take her before the Supreme Court as the court has to consider the case in the presence of the defendant.