The Thai Journalists Association (TJA) is fretting about a new order of the military regime, saying the tightened grip on the media could impede the right to information of the public. 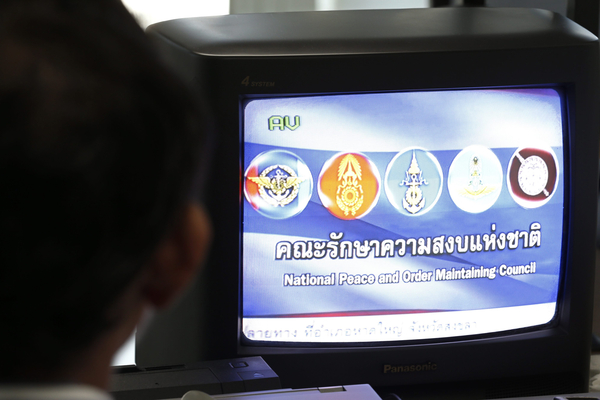 A man watches a TV screen displaying logos of the National Council for Peace and Order Peace and Order Maintaining Council. The military regime has tightened the grip on the mass media with a new order issued on Friday. (EPA file photo)

The order on "cooperation'' from the press issued on Friday night could obstruct the right to information of people, it said in a statement released on Saturday.

TJA president Pradit Ruangdit said journalists perform their duty based on facts, accuracy and balance, and the National Council for Peace and Order already has the authority and existing laws to take action against the media violating the rules.

The military's announcement on Friday asks for "cooperation" from the media to not criticise the NCPO operations. Failure to do so will result in an immediate ban of the media in question and, subsequently, legal action.

The call covers all platforms of the media — from print to electronic and online — and ownerships, whether they are run by the government or privately owned.

They may not interview or invite scholars, former civil servants or former employees of courts, judicial offices and independent organisations to give opinions in a manner that may create or escalate conflicts, distort facts, confuse society or lead to violence, the order says.

It is also mandatory for them to disseminate all information issued by the NCPO.

As well, they may not propagate confidential information of government agencies whether they are voice, images or video clips.

Provincial governors are also required to stop any assembly in opposition of the NCPO without delay and seek help if they cannot handle it.

The TJA showed concern about a lack of clear directions for the authorities to take action against the media deemed failing to abide by the order. The vast power given to the authorities without checks could be a setback, it added.

The association representing journalists plans a meeting of editors and executives next week to find a common solution to the latest order.