New constitution to be drafted, in effect in one year
Thailand
Politics

New constitution to be drafted, in effect in one year

Interim charter does not exclude Prayuth being PM

Visanu Krue-ngam explains the interim charter to reporters at a press conference at Government House on Wednesday. (Photo by Apichart Jinakul) 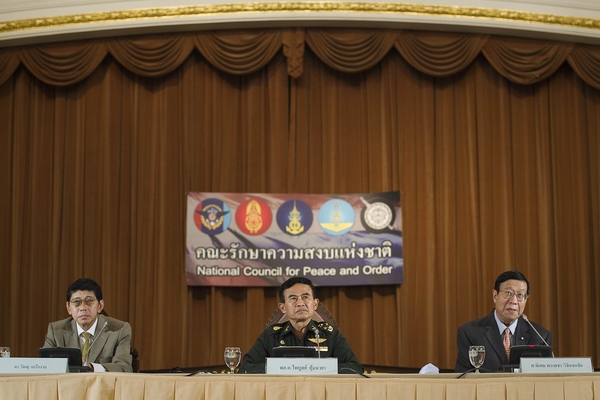 Mr Visanu said this at a press conference televised live from Government House on Wednesday to explain what will come next after the interim charter took effect, having been approved by the King on Tuesday.

Also present at the conference were Gen Paiboon Khumchaya, NCPO deputy chairman for legal and judicial affairs, and Pornpetch Wichitcholchai, adviser to the NCPO chairman.

Mr Visanu said the interim charter marked the beginning of the second phase of the roadmap to reform.

He believed it would take about one year before drating of the country's 20th constitution was completed, ending the second stage of the roadmap.

The third stage of the roadmap to reforms would begin with a general election after organic laws, to be issued as required by the new constitution, had been completed and put into effect.

Mr Visanu described the interim charter as the source of five important bodies.

First, there would be a national legislative assembly (NLA). Based on the existing database, the NCPO would select members of the NLA from people representing various occupational groups, regions, gender and age. They must be aged 40 years or more, and must not hold a post in a political party, such as party leader or excutive member. Ordinary party members were acceptable.

The NLA would be responsible for legislating laws and endorsing the appointment and removal of the prime minister. To check the government's performance, the NLA would be able only to raise questions for cabinet ministers to answer.

It would have no power to call a no-confidence debate. The NLA could only call a general debate on the performance of the government's members, without a vote. It could also approve some matters such as the appointment of members of an organisation set up as stipulated by the constitution.

Third, there would be a national reform council (NRC) with no more than 250 members. Of these, 77 would be selected from the existing provinces through a selection process, while 173 others would be screened from resourceful people from 11 fields -- politics, local administration, public administration, law and justice, education, public health and environment, energy, mass communications, and others.

The 173 would be selected from a total of 550 nominees, 50 each from the 11 fields, nominated by various organisations. Political party members and government officials could be nominated for selection to the NRC.

The NRC would be responsible for exploring ways of reforming the country in various aspects, and endorsing a draft constitution.

Fourth, there would be a constitution drafting committee (CDA) with 36 members - 20 from the NRC and five each from the cabinet, NLA and NCPO. The NCPO chairman would appoint the CDA chairman, the 36th member.

The CDA would be given 120 days to complete its work.  A CDA member must not have have a post in a political party during the past three years and must not be a member of an independent organisation. CDA members would not be able to hold a political post for the following two years.

A draft constitution, on its completion, may be amended before being forwarded to the NRC for endorsement. The drafting of the constitution must be made under the framework mentioned in Section 35 of the interim charter.

Fifth, the NCPO would continue to exist to give advice to the cabinet, but the cabinet would have the right not to follow it. The NCPO could hold a meeting with the cabinet, but would not have the power to remove the prime minister or cabinet members.

The NCPO's existence would be mainly to ensure law and order, as mentioned in Section 44 of the interim constitution.

Mr Visanu said this interim charter, with 48 sections, was longer than the past ones to give a wider coverage. If any provisions were found later to be problematic, the cabinet or NCPO could ask the NLA to amend them.

The NCPO would stay until the new charter was in effect.

Mr Visanu and Gen Paiboon both said the new charter does not bar the junta leader from being the prime minister. The decision rests with the NLA, the NCPO's legal adviser said.

Gen Paiboon did not rule out the possibilty of top generals in the regime council taking cabinet positions, including that of prime minister, after their retirement due at the end of September.

He praised Gen Prayuth for his handling of the situation since he led the top brass to seize power from the government and declared the coup on May 22.

Several top generals, including Gen Prayuth and air force chief ACM Prajin Juntong, are due to retire at the end of September.