Section 44 of the interim charter has sparked a controversy as it gives special power to the junta chief to do anything he wants for the sake of unity, peace, reform and reconciliation. 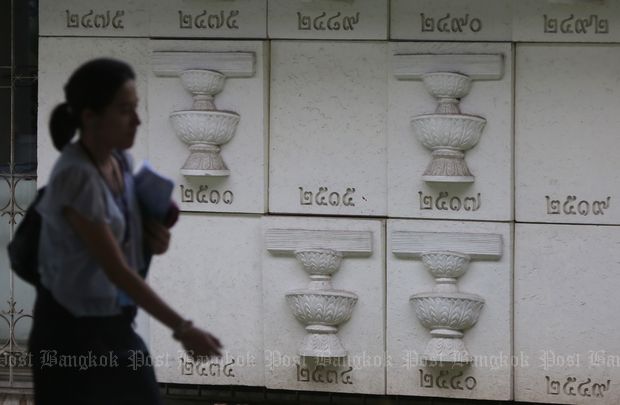 An official walks past a mural showing Thailand's many constitutions at the Thai Parliament Museum in Bangkok on July 23, 2014. The interim charter promulgated on July 22 was Thailand's 19th since the rule of the country was changed to a constitutional monarchy in 1932. - SEKSAN ROJJANAMETAKUN

The section allows the chief of the National Council for Peace and Order (NCPO), with the approval of the NCPO, to issue orders or do anything he deems necessary for national reform, unity, reconciliation, peace, order, security of the kingdom and the throne, the economy or the government, regardless of whether such acts have legislative, executive or judicial effects.

"Such orders or acts, and any act in compliance with them, shall be regarded as legitimate, constitutional and final. After such acts have been taken, the chairman of the National Legislative Assembly and the prime minister shall be informed promptly," it said.

Former prime minister Abhisit Vejjajiva wrote on his Facebook on Wednesday the interim charter did not surprise him.

"What's unusual about it is Section 44, which grants the NCPO chief special power," he said.

"In the past, post-coup charters in effect handed over sovereign power - the legislative, executive and judicial powers. Coup makers might retain some power but mostly over security issues.

"Even in 1959, the notorious, most dictatorial Section 17 gave the prime minister boundless power but only to stop acts threatening security.

"Judging from the wording on effects and the fact that there are no checks, the NCPO chief can pass a law and/or overturn a court ruling. The scope is not limited to security issues like in 1959 and such acts can be justified as 'for the benefit of national reform or reconciliation'."

The section may therefore not be in line with the intention of Section 3.

"I believe society accepts special power at times of unrest. But it's unclear for what purpose it serves to extend the power to override the legislative and judicial powers or how it is necessary to cite reform and reconciliation to exercise it," Mr Abhisit said.

"Structurally, the National Legislative Assembly (NLA) and National Reform Council come from the NCPO and security threats are dealt with primarily by the government," he wrote.

"I hope the NCPO chief will explain to us how he plans to use the power for clarity and to avoid conflicts and, possibly, unrest," he said.

Sharing his view was Nipit Intarasombat, a former Democrat MP.

"This is like Section 17 of the interim charter during Field Marshal Sarit in 1959. But personally, I think it all depends on how it is used. Let's think of it as a gun which can protect or hurt us. It hinges on the morality of the person who wields it. Let's see how the NCPO does that," the lawyer said.

He also views Section 38, which scraps the National Reform Council and the Charter Drafting Committee, if the constitutional draft is not approved and requires new bodies be set up to do the job.

"This could pose a problem as we see no end to the process and an election might be delayed," he said.

But Pornphet Vichitcholachai, an NCPO adviser, said Section 44 did not grant the NCPO power to intervene in the legislative branch or courts, nor could it be used to order around the government or the NLA.

"The section applies only when the criteria are met. If an executive or legislative process takes a long time, the NCPO chief may issue orders or announcements to solve the problems at hand, especially security ones.

"It's unlikely to go as far as Field Marshal Sarit, who interfered with criminal cases," he said.

"Before this charter, the NCPO chief could do even more than what Section 44 allows him today but he had never done anything or punished anyone arbitrarily. For example, officials are transferred for suitability. I'm confident Section 44 will protect Thailand and maintain peace and order rather than the opposite," he said.

Visanu Krue-ngam, an architect behind the charter, said the special power was the result of keeping the NCPO. The NCPO is here to stay to do what a cabinet cannot do easily.

"If the NCPO exists without such power, there could be problems that might lead to a counter-coup.

"It's a necessary double-edged sword because existing laws are inadequate. Over the past two months, we can see the NCPO had more power than given it under Section 44 but it had never abused it, despite calls for the junta to take matters into its own hands in such cases as the child rapist," Mr Visanu said.