Former prime minister Yingluck Shinawatra was reunited with her brother Thaksin on her arrival in Paris after flying out of Thailand early yesterday. 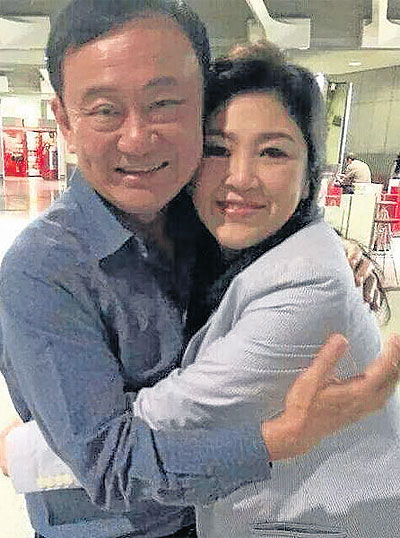 He said someone sent him the photo while he was having his hair cut.

Ms Yingluck and her son left Bangkok for Paris on a flight which departed at 12.05am yesterday.

Speaking to reporters at the airport late on Wednesday, Ms Yingluck asked for privacy.

"Let me take a leisure trip with my son. Please let's talk when I return in August," she said.

Ms Yingluck is scheduled to return to Thailand on Aug 10. She said earlier she planned to visit France, the United Kingdom, Germany, Belgium and the US.

Commentators have been speculating on whether Ms Yingluck will return to fight her court cases, or go into self-exile like her elder brother.

Checks with airline staff found Ms Yingluck had not purchased any return ticket. She was travelling on a one-way ticket to Europe.

A source said it was possible Ms Yingluck and her followers may purchase return tickets later or they might have already bought one-way and return tickets from different airlines.

A poll by the National Institute of Development Administration found 41% believe she will not return, as against 39% who believe Ms Yingluck will come back by the due date.

Most were certain she will attend her elder brother Thaksin's 65th birthday party in France on Saturday.

Netizens also discussed the amount of baggage Ms Yingluck took with her.

Some said she took 15 suitcases, while others said the 15 bags was the total number of bags checked in for the whole group of 11 people travelling with her, and this did not indicate whether she planned to stay overseas.

The National Council for Peace and Order said earlier that Ms Yingluck had sought permission from the council to take her son for a holiday in Europe between July 20 and Aug 10.

The speculation that Ms Yingluck might not return to Thailand by the due date arose after the National Anti-Corruption Commission decided to recommend that she be indicted for dereliction of duty in failing to deal with corruption and losses in the rice-pledging scheme, one of the flagship policies under her government.

The national anti-graft agency has forwarded its findings to the prosecution. If she is indicted, she will be tried in the Supreme Court’s Criminal Division for Holders of Political Positions.