Two of four men suspected of being involved in violent attacks against anti-government protesters have been arrested on firearms-related charges, police said. 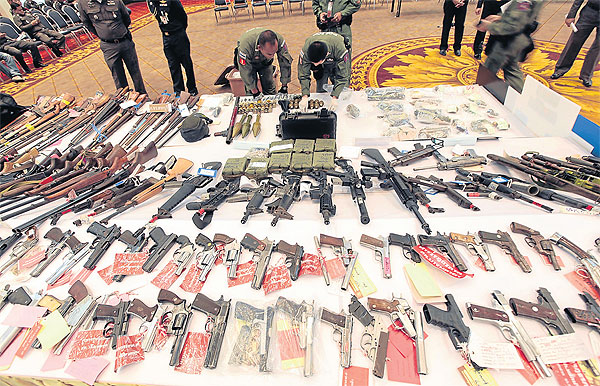 A cache of firearms seized as part of the junta’s crackdown on war weapons is displayed at First Army Region headquarters. The confiscated items include assault rifles, grenades, rocket propelled grenades and bulletproof vests. Apichart Jinakul

Nattapan Bangla, 40, and Charoen Promchart, 38, were caught on Monday, four days after the military court issued a warrant for their arrest.

Krissada Chaikahe and Phasanai Panat, the two others named in the same warrant, are still on the loose. Mr Krissada is also wanted on a warrant approved by the Criminal Court on Feb 20.

He is accused of throwing hand grenades at People's Democratic Reform Committee (PDRC) protesters on Banthadthong Road and at the Victory Monument earlier this year.

The deputy police chief said Mr Nattapan admitted having the grenades in his possession, but denied using them.

Pol Gen Somyot said Mr Krissada is believed to have fled overseas. He allegedly took four grenades from Mr Apichart and used three of them in the attacks against PDRC demonstrators.

Mr Charoen and Mr Nattapan have been charged with illegally possessing firearms and violating the National Council for Peace and Order's (NCPO) order on firearms control.

The NCPO and the Royal Thai Police, meanwhile, have announced the progress of nationwide crackdowns on weapons, drugs, gambling and forest encroachment.

Pol Col Songpol Wattanachai, deputy chief of Metropolitan Police Division 1, said 70,635 people were rounded up and more than 83 million speed pills, 1,000 kilogrammes of crystal methamphetamine and 400kg of heroin confiscated in the campaign against drugs.

The gambling clampdown saw the arrest of 22,752 suspects and confiscation of more than 4,000 betting machines. Authorities seized more than 4.1 million cubic metres of restricted logs and timber in the crackdown on forest encroachment.