An official shows the NLA group on the Line app, which all appointed members will use to communicate.

Of the 200 members of the National Legislative Assembly (NLA), 105 are active and retired military officers while 10 are police officers. Only 12 are women.

The list was announced late on Thursday after being endorsed by His Majesty the King.

The same royal order also requires a royal decree be passed for the NLA to first convene on Aug 7, 2014 and another for the selection of the National Reform Council.

By gender, 5% or 12 of the members are women, compared to 15% in the previous House of Representatives and the Senate.

Of the 105 military officers, 67 are from the army, 19 each from the navy and the air force. Fifteen are from class 12 of the Armed Forces Academies Preparatory School, the same class as Gen Prayuth Chan-ocha's, chief of the National Council for Peace and Order (NCPO), according to Manager Online.

Fourteen are from Class 13 and 12 are from class 15 including Lt Gen Preecha Chan-ocha, Third Army Region commander and Gen Prayuth's brother.

Of the ex-senators group, all except three were appointed senators in the previous Senate.

Several belong to the so-called "40 senators" group known for their support of anti-government protesters' agenda during the unrest leading to the May 22 coup.

The former elected senators who made it to the list: Maj Gen Kolchai Suwannaboon of Songkhla province, who is a classmate of Prayuth Chan-ocha, chief of the National Council for Peace and Order (NCPO), Peerasak Porchit (Uttaradit) and ACM Ongart Pongsak (Kanchanaburi). 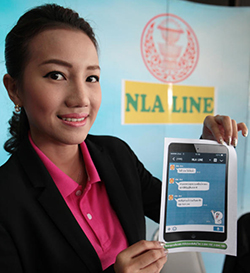 An official shows off the NLA LINE chat group, which all appointed members will be able to join to update discussions. (Photo by Chant Katanyu)

Other interesting appointees include key government officials and leaders of groups.

They are Gen Nipat Thonglek, former defence permanent secretary under the Yingluck Shinawatra government; Klanarong Chantik, a former national anti-corruption commissioner; Khunying Songsuda Yodmani, chairwoman of the US Alumni Association and daughter of Field Marshal Thanom Kittikachorn; Wallop Tungkananurak, secretary general of the Fund for the Better Life of Children; Ampon Kittiampon, secretary general of the cabinet; Kittisak Rattanvaraha, deputy chairman of the Thai Farmers' Network who led protesters to pressure the Yingluck government to repay farmers under the rice-pledging programme.

All are required to report in person at parliament between Aug 1-5.

It was anticipated Pornpetch Wichitcholchai, adviser to the NCPO chairman, will be elected president of the NLA while Visanu Krue-ngam, an NCPO adviser and interim charter drafter who is not on the list, will likely be deputy prime minister for legal affairs, according to Matichon.

As for the cabinet, it was widely speculated that Pornchai Rujiprapa of PTT Plc's board will be the information and communication technology minister. Former deputy army commander Gen Daopong Rattanasuwan will work closely with the prime minister to supervise the Budget Bureau and the Board of Investment while Gen Prawit Wongsuwon will be deputy prime minister and defence minister. Former army chief Gen Anupong Paochinda may be interior affairs minister.