The Government House compound is improved for a new cabinet.

The future of martial law will rest with the new government about to be formed when it takes over administrative duties from the military regime, a senior army officer said on Wednesday. 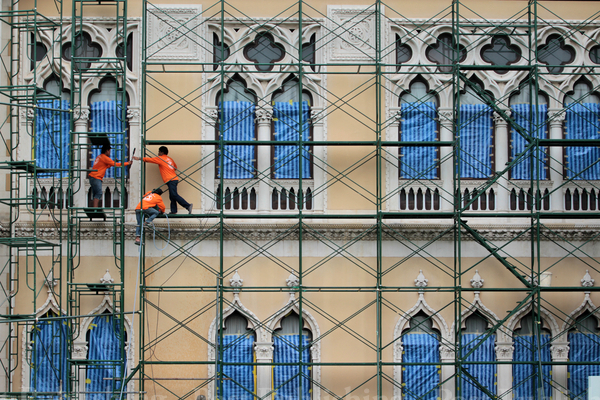 Workers paint the Santi Maitree building at Government House on Wednesday to prepare for the new government. Lt Gen Kampanat Ruddit said the new cabinet will decide the future of martial law. (Photo by Chanat Katanyu)

Kampanat Ruddit, the deputy army chief-of-staff, said the National Council for Peace and Order (NCPO) had considered ending martial law but said it will stay in place at least until the new government is functioning.

The timing for the end of martial law would be up to the new government once a proposal is forwarded by the NCPO, said Lt Gen Kampanat, who is in charge of reconciliation for the military regime.

Gen Prayuth said on Monday he supported the continuation of martial law as will help the council to maintain law and order after it passes over administrative affairs to the new cabinet.

The new government will be formed by mid-September after a new prime minister is picked by the National Legislative Assembly (NLA).

The NLA will elect its chairman and two deputies in their first meeting on Friday. The meeting follows the opening ceremony on Wednesday presided over by His Royal Highness Crown Prince Maha Vajiralongkorn on behalf of His Majesty the King.