Coup leader Prayuth Cha-ocha has sent a stern warning to people facing lese majeste cases and still on the run, saying they will face legal action. 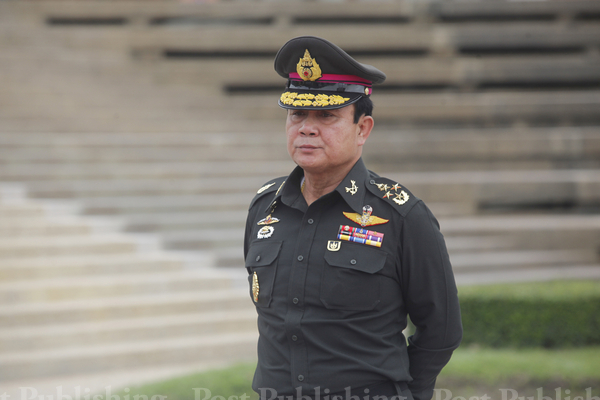 Gen Prayuth even identified some of them in his weekly televised address on Friday. "Let me name them," he said. "[They are] Chupong Theetuan, Anek Chaichana, Saneh Thinsaen, Amnuay Kaewchompoo and Ong-art Thanakamolnan."

"There are some more," the army chief said.

The people he named were among those ordered in June to report to the National Council for Peace and Order (NCPO).

Gen Prayuth has rarely mentioned people by name since he began his weekly broadcasts. For example, he never mentioned Suthep Thaugsuban, despite being furious when the former anti-government protest leader boasted that he had been in close contact with the general long before the May 22 coup. He didn't have to: Mr Suthep got the message and has refrained from public comments since.

Their whereabouts are unknown and he admitted it would be difficult to have them extradited if they are located.

Few countries recognise lese majeste as an extraditable offence. That prompted authorities earlier to lay weapons possession charges against Jakrapob Penkair, a vocal critic of the coup makers, who also has been accused of lese majeste and has fled the country. Mr Jakrapob claimed the weapons charges were a setup.

The NCPO chief, who is widely expected to be named prime minister by the new National Legislative Assembly, also dismissed claims by Kritsuda Khunakasem that she was tortured while in detention.

He said the allegations were "totally untrue" and that the red-shirt activist had intentionally attacked the military regime.

Mrs Kritsuda claimed in an interview posted on YouTube and released on Sunday that she was tortured by soldiers while in detention at a military camp.

She was arrested in Chon Buri on May 27 for failing to report to the NCPO, taken to a military camp and released on June 24. She fled the country shortly after that.

Human Rights Watch, the United Nations for High Commissioner for Human Rights and the International Commission of Jurists have urged the establishment of an independent panel to look into the case.

The NCPO dismissed the allegations, saying that Mrs Kritsuda cooperated with authorities and was properly treated during the detention.

NCPO spokesman Col Winthai Suwaree on Monday shrugged off the call, saying the country had no plan to investigate the issue.