Business leaders have welcomed the nomination of junta chief Gen Prayuth Chan-ocha to become prime minister, saying his strong and decisive leadership is essential for the country to tackle numerous urgent problems. 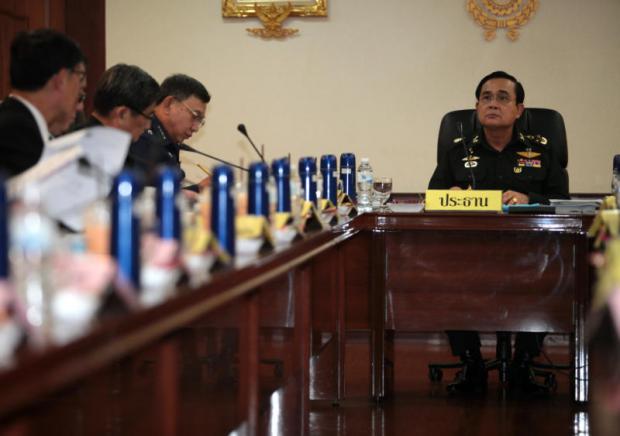 Junta leader Gen Prayuth Chan-ocha chairs a meeting of the Board of Investment on Tuesday. He was yesterday nominated by the National Legislative Assembly to become Thailand's 29th prime minister. CHANAT KATANYU

Pornsil Patcharintanakul, deputy vice-chairman of the Thai Chamber of Commerce (TCC), said it did not matter who became the premier.

"What we are expecting is long-term strategic planning for Thailand's economy," he said. "For instance, how Thailand will be over the next two decades and how agricultural production and zoning management will be in the long-term future.

"If the National Council for Peace and Order is serious about economic reform, the Science and Technology Ministry should be upgraded to become the No.1 ministry to support research and development, not the commerce and industry ministries. The Finance Ministry should also play a greater part in supporting tax and incentives."

Boonsithi Chokwatana, chairman of consumer products conglomerate Saha Group, said the country was fortunate to get Gen Prayuth as the new PM.

"He is decisive and dares to work fast. His character is very suitable to managing the country and reviving the economy. His fast decision-making will help him solve our political and economic problems and make Thailand more developed than many Asean countries," he said.

TCC chairman Isara Vongkusolkit said business people pinned hopes on Gen Prayuth to move Thailand forward, get out of the political crisis and fight corruption. "We hope the new interim government will build up more confidence among foreign investors," he said.

Pattera Dilokrungthirapop, chairwoman of the Association of Securities Companies, said she hoped the new premier could accelerate development.

Leigh Scott-Kemmis, president of the Australian-Thai Chamber of Commerce, said: "I don't think anyone is surprised by the choice and, considering what has been going on, I think it is the safest option."

The challenge will be moving Thailand out of the middle-income trap, he said. Crucial to that is high-technology industry that requires enforcement of laws.

Tim Leelahaphan, an economist at Maybank Kim Eng Securities, said the appointment of an interim government would be good for domestic consumption and investment in the near term.

Since the junta aims to implement long-term economic reforms, stimulus measures, particularly populist policies, are not expected to occur substantially next year, he said.

Kemathat Paladesh, president of Bangkok Media and Broadcasting Co, said having Gen Prayuth as PM will create more confidence among both Thai and international investors.

The hard work by the junta has gradually moved the country in the right direction, particularly its efforts to solve corruption and strengthen national security.