Prime Minister Prayuth Chan-ocha is considering appointing seven more people to the National Council for Peace and Order (NCPO) and making the military council a "super cabinet", according to a highly placed source. 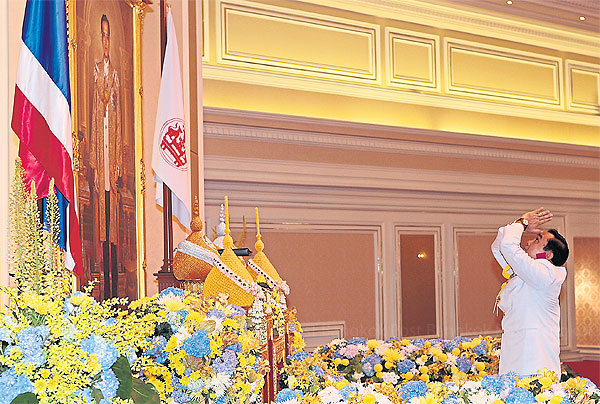 Army chief Prayuth Chan-ocha pays homage to an image of His Majesty the King during a ceremony Monday at the Royal Thai Army headquarters on Ratchadamnoen Avenue to receive a royal command appointing him as the country’s 29th prime minister. CHANAT KATANYU

Under the interim charter, the military regime and NCPO chief have power over the interim government, but by making the NCPO into a "super cabinet" Gen Prayuth could push through urgent measures which he would not normally be legally allowed to do in his capacity as premier.

The NCPO, which Gen Prayuth heads, currently has eight members, seven of whom are military officers and one a police officer.

Section 42 of the interim charter allows changes to be made to the current composition as necessary, but the number of members must not exceed 15.

In a televised address after receiving a royal command appointing him as prime minister Monday, Gen Prayuth emphasised that his interim government and the NCPO would be operating together closely.

He said the government and the military council would impose checks and balances on each other to ensure transparency, but would not interfere with the others' responsibilities.

The source said the cabinet would handle the normal business of government, but the NCPO could use its special powers to push through laws and other actions to handle difficult issues such as drug suppression, corruption, and short-term anti-poverty measures.

The source said the seven new appointments to the NCPO are likely to include the new commanders of the navy and the air force, the new supreme commander, the new police chief and the new defence permanent secretary.

The two other appointments will be reserved for civilians.

According to the source, the two civilians tipped to become NCPO members are legal specialist Meechai Ruchupan and former finance minister Somkid Jatusripitak.

Mr Meechai served as a legal adviser to the government of Gen Prem Tinsulanonda, holding the post of PM’s Office minister as well as Senate speaker.

Mr Somkid is not eligible to become a member of the cabinet under the interim charter due to his five-year political ban following the dissolution of the Thai Rak Thai Party in connection with vote buying.

"Having a bigger team will help the NCPO address problems more effectively," said the source.

In his speech, Gen Prayuth said the cabinet should be ready by the end of September and urged the public not to be "overly concerned about individuals".

It was believed he was referring to speculation over the cabinet line-up.

Gen Prayuth initially said the cabinet list would be completed in October. He later said the line-up would be finished and forwarded to His Majesty the King for royal appointment in September.

"I want to correct myself. I gave the wrong month. I'll submit the cabinet line-up before the end of September, so the government can start working in October," Gen Prayuth told the Bangkok Post.

Gen Prayuth vowed to strengthen every system to effectively combat graft and to prepare them for political reforms that would bring about good governance.

He stressed that the public would be instrumental in helping the administration solve the country's problems, whether they are economic, social, or judicial.

He said he would like the National Reform Council (NRC) to comprise a diverse mixture of people to push for reforms in 11 areas.

"We don't intend to block anyone or get rid of anyone. We want the public to be part of the NRC and help build the country's future, without causing any more problems," he said.

Gen Prayuth pledged to perform his duties as prime minister honestly and sincerely and to adhere to the interests of the country and the people.

An army source said under the timeline revealed by Gen Prayuth, the cabinet will be in place in early October, instead of September.

The timeline will be slightly delayed because Gen Prayuth is concerned about having too many active military commanders in the cabinet, the source said.

Gen Prayuth is waiting for the navy and air force commanders to retire from their posts before announcing the line-up, the source added. Both of them are poised to become part of the cabinet.

According to the same source, during the one-month period prior to mandatory retirement, the Prayuth administration will run the country using the NCPO as his cabinet.

Following the royal command ceremony, Gen Udomdet, also NCPO secretary-general, led a group of army offices to congratulate Gen Prayuth on his appointment and pledged to give their full support to his government.

Air force commander ACM Prajin Juntong said Gen Prayuth had asked those who attended the ceremony not to spend resources celebrating his appointment.

Quoting Gen Prayuth, the air force chief said time was running out and everyone had to focus on the work ahead, not celebrate.