Apiwan falls ill while on the run
Thailand
Politics

Apiwan falls ill while on the run

Former deputy House speaker Apiwan Wiriyachai, wanted for allegedly insulting the monarchy, is sick and has undergone a lung operation in the Philippines, a high-placed source in the Pheu Thai Party said. 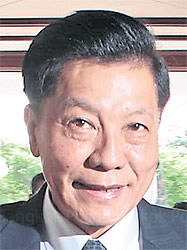 Apiwan: Had lung surgery in Philippines

The source said Col Apiwan, a leading Pheu Thai member and former core leader of the United Front for Democracy against Dictatorship, is still weak after his operation for lung inflammation on Monday.

He is taking refuge from lese majeste charges in the island nation, the source said.

The Criminal Court in July approved a warrant for Col Apiwan's arrest for allegedly insulting the monarchy in a speech on the Pitak Siam group's rally stage in 2012, a violation of Section 112 of the Criminal Code.

A lese majeste complaint was filed against Col Apiwan at Chana Songkhram police station on June 26 this year. The complainant presented as evidence a compact disc containing Col Apiwan's speech at a red-shirt rally.