Gen Prayuth Chan-ocha attends a ceremony to celebrate the 28th anniversary of the army headquarters on Friday.

Prime Minister Prayuth Chan-ocha gave the public a glimpse of his cabinet for the first time on Friday, confirming that the line-up will include military officers. 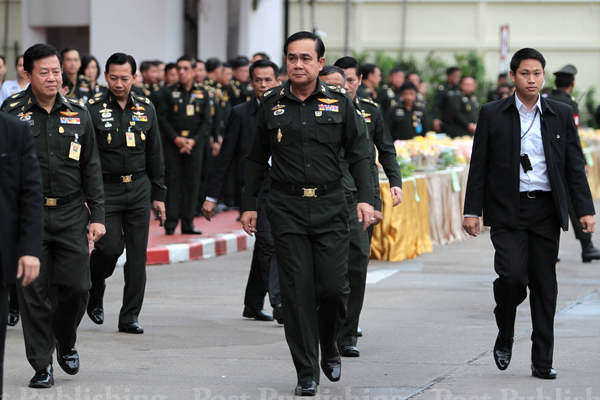 Gen Prayuth Chan-ocha leads officers to celebrate the 28th anniversary of the army headquarters on Friday. He said later that he would lead military officers into his cabinet. (Photo by Chanat Katanyu)

But he also stressed that any ministers who fail to measure up will not last long, regardless of what hats or shirts they wear.

The coup leader and army chief used his weekly Returning Happiness to the People programme to calm fears over the inclusion of people in uniform in his government and defended the need to appoint them.

"I don't think it's a problem. The point is where the problems lie and how we can fix them," he said.

"Don't look at how many officers there will be. I have thought about this thoroughly and it is impossible not to have officers because security remains a problem."

Initial reports suggest that 12 of the 36 ministers will be serving or retired military men. Royal endorsement of the cabinet is not expected until late September, after all prospective members have been vetted.

Preliminary indications are that Gen Surasak could take up the labour minister's post, ACM Prajin would be transport minister and Gen Anupong would control the Interior Ministry.

Gen Prayuth, however, pledged no favouritism for ministers coming from the armed forces and challenged sceptics to judge him and his team on their actions.

"I've made all those decisions. Let's wait and see," he said.

"If they don't perform, I can change. A government can be reshuffled as many times as possible. Those with no performance will be out. Those who are corrupt will go to jail. That's it. Nothing to fear."

He urged all sides to focus primarily on how to work for the country's interests, rather than on who will be appointed to the cabinet.

"We don't want anyone to obstruct our work, but what we need is more support from the people," the premier said.

Prominent civilians tipped to be in the government include MR Pridiyathorn Devakula, who would be deputy prime minister on the economic policy; Narongchai Akrasanee as energy minister, and Wissanu Krea-ngam as deputy premier for legal affairs.

Gen Prayuth said on Wednesday that he would appoint five deputy prime ministers. He promised that the cabinet would be ready by September but the resignations of potential ministers over the past two days stirred speculation that it could be announced sooner than expected.

The chairman of the National Council for Peace and Order (NCPO) also tried to mend fences with local administrations after the country's top civil servant dropped a bombshell by complaining about the extravagant lifestyles of some administrators, such as one who enjoyed 100,000-baht bottles of wine and first-class air travel.

The Facebook comments by ML Panadda Diskul, the permanent secretary for the PM's Office, drew anger from local administrators who launched a protest, forcing him to apologise to them.

Gen Prayuth said the NCPO had no intention to discredit local administrations and called for a truce to end the hard feelings.

Although some must be improved, most local administrations had been cooperating with the NCPO on reform plans, he added.

Gen Prayuth also reiterated the pressing need to combat corruption which has been so deeply entrenched in the country.

He said efforts to battle graft must produce tangible outcomes within one year, adding that collaboration from all sectors was needed to achieve the aim.

Legal amendments must be introduced to remove the statute of limitations in corruption cases, and private companies or individuals found guilty of bribing state authorities must also be subject to legal punishment, Gen Prayuth said.