He's hiding in the Philippines

A former deputy House speaker wanted on lese majeste charges has slipped the junta's net - Ousted by Yingluck, Thirachai is now in the running for next finance minister - The UK ambassador speaks his well-educated mind on social media

It was the subject of much conjecture. Where was controversial former deputy House speaker Apiwan Wiriyachai, who appeared to have gone into stealth mode even before the military coup of May 22? 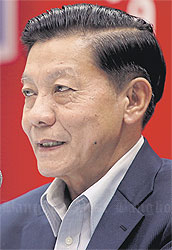 Col Apiwan was one of the most outspoken critics of the political groups which were opposed to the Yingluck Shinawatra administration toppled by the coup that was led by the National Council for Peace and Order.

Col Apiwan, a key Pheu Thai Party member, is wanted for allegedly insulting the monarchy. He was charged with lese majeste after a speech he gave on a rally stage in 2012.

The lese majeste complaint against Col Apiwan was filed at Chana Songkhram police station. The complainant presented as evidence a compact disc containing Col Apiwan's speech at that red-shirt rally.

Since then police have been looking for the former deputy speaker and teams of investigators have frequently been assigned to chase leads as to his whereabouts. The statute of limitations on the case spans 15 years and although there is plenty of time for the police to locate the politician, they insist the gravity of the offence warrants a prompt response from the law enforcement officers.

After months with little progress reported by the investigators, it has emerged that Col Apiwan is sick and has undergone a lung operation in the Philippines, a highly placed source in the Pheu Thai Party said.

The source revealed Col Apiwan, also a former core leader of the red-shirt United Front for Democracy against Dictatorship, is still weak after his operation for lung inflammation early this week.

He has taken refuge in the island nation where he is believed to have received military training when he was serving in the army, the source said.

A political source said it was unclear when or how Col Apiwan managed to slip out of the country to receive medical treatment in the Philippines.

Those familiar with the matter said in the past some Thai embassy staff in a number of countries have made themselves "accommodating" to politicians who travel overseas. The politicians in question might not have positions in the government anymore, but they still wield immense influence.

A case in point is ousted premier Thaksin Shinawatra who often visits countries or territories close to Thailand. He is reportedly met by well-wishers who include senior state officials who either work in postings at Thai missions overseas or who have flown out especially to meet the former prime minister.

The May 22 coup, however, saw some of these officials fall from grace after they were transferred to inactive posts on account of their being "inclined" toward the former regime.

News reports have also been plentiful of plainclothes military officers accompanying ousted premier Yingluck Shinawatra on her recent trip to France to join the birthday celebrations of her elder brother, Thaksin.

Even though Gen Prayuth Chan-ocha has been formally appointed prime minister, he is expected to continue running the country through the mechanisms of the National Council for Peace and Order for the time being, just as he has done over the past three months since seizing power on May 22.

Gen Prayuth on Wednesday pledged to form a cabinet and appoint five deputy prime ministers by next month. Gen Prayuth, who is also the army chief, and the commanders of the air force and the navy will retire from the military at the end of next month. 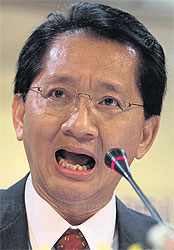 This means Gen Prayuth will not submit the nominations of anyone for cabinet portfolios until next month.

This has prompted several people, including former and incumbent ministerial permanent secretaries, to lobby hard for cabinet posts, which in turn has led the media into formulating their own speculative lists of potential candidates for cabinet posts. The lists change from day to day.

The Finance Ministry is among the key ministries that have become the focus of attention.

While some ministries are dominated by the military, Finance seems to be off-limits to those in uniform given that a finance minister must have professional qualifications to run the ministry to an exacting standard immediately upon taking office.

However, the favourite for the post turns out to be Thirachai Phuvanatnaranubala, the finance minister under the Yingluck Shinawatra administration.

His name comes as a surprise, although he undoubtedly has the credentials to do the job.

An NCPO source said several ideas and proposals which Mr Thirachai has presented on his Facebook page have piqued the interest of the junta.

Mr Thirachai was removed from the finance post by former prime minister Yingluck and was replaced by Kittiratt Na-Ranong.

Mr Thirachai then went on to criticise several of the Yingluck administration's populist policies such as the controversial rice-pledging scheme as well as its fiscal and financial policies.

He voiced opposition to the Yingluck government's plan to sell the Finance Ministry's stakes in PTT Plc and Thai Airways International to the state-run Vayuphak Fund in order to free PTT and THAI from the status of being state enterprises and to reduce the public debt so the government at the time could borrow more money. Mr Kittiratt had insisted there was no such plan.

He also spoke out against the Yingluck government's plan to transfer its debt to the Bank of Thailand, reasoning that this could disrupt the country's financial and fiscal discipline.

He tried to communicate his thoughts to the public, while the mass media also spread his ideas to a wider audience.

Most importantly, he has now caught Gen Prayuth's attention, although he is keeping mum on whether he will take the finance post.

The UK ambassador to Thailand, Mark Kent, has joined the vibrant social media community in Thailand by launching his own blog on Thursday after being here for two years.

Asked about the timing of the launch — 97 days after the coup and five days after coup leader Gen Prayuth Chan-ocha was made premier — he laughs and says it was coincidental.

Mr Kent was one of the western ambassadors who was less than calm during the recent volatile political situation. 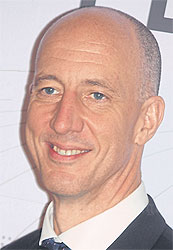 Kent: Back in the blogosphere

The ambassador, who is proficient in speaking Thai, had previously expressed his views on Thailand, Thai-UK relations as well as human interest subjects on Twitter.

But he found the concise format of the 140-word space limit of Twitter could not allow him to expound on more profound subjects that required detailed explanation.

On the launch of his blog the ambassador got a round of applause from local and expat press when he touched upon an issue that is close to their heart — freedom of expression.

"I would like to lend solidarity to the Thai media which has been working through difficult times to sustain their freedom of expression. Let you keep up the hope and aspirations. The UK and the European Union always stand in support of the media work in 'holding the power to account'," Mr Kent said.

The blog will be written in both English and Thai, reflecting his personal thoughts and views on a wide range of issues such as the monarchy, democracy, rule of law, equality and freedom of expression — and, of course, football. The ambassador is a fan of Arsenal.

Mr Kent, who also speaks Vietnamese, French, Spanish, Portuguese and Dutch, resumes blogging after an absence of nearly four years. "I used to write when I was ambassador to Vietnam. Since then I have moved to using Twitter (@KentBKK). Now I will try to juggle both."

He is one of 107 bloggers under the UK Foreign and Commonwealth Office's auspices. It has provided a place for officials to engage in direct and informal dialogue with public audiences about international affairs and the work of the office.

He has offered his take on democracy, which in his view has many variations in different countries throughout the world. "But the common theme is that the government is truly representative of the will of the totality of the electorate," he said.

It's an ideal venue to spread values that British society hold high — "equality of opportunity in society, regardless of social background, location, gender, ethnicity or sexual orientation", the ambassador, who hails from a small village in Lincolnshire, said.

The son of a farmer and teacher, Mr Kent says the right to challenge and peacefully express views is essential for the development of any society. It brings different perspectives and a sense of social inclusion, which in turn helps to create a dynamic, prosperous and innovative society.

Mr Kent has been British ambassador to Thailand since August 2012. Prior to that he spent a year learning Thai at universities and language schools in Bangkok, Chiang Mai and Khon Kaen. He is also an alumnus of the King Prajadhiphok's Institute's Advanced Course in Politics and Governance in Democratic Systems.

He has a degree in law from Oxford and postgraduate qualifications in European law and economics from the Universite Libre de Bruxelles and business administration from the Open University.