Prayuth says he needs ministers he can trust

Prime Minister Prayuth Chan-ocha has defended the likelihood that his cabinet could be loaded with military officers. 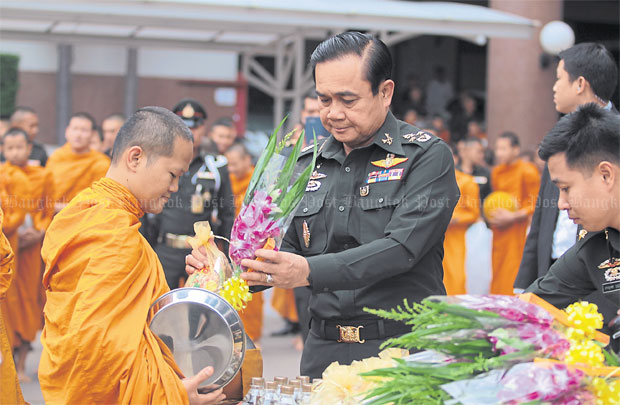 Prime Minister Prayuth Chan-ocha gives alms to monks to mark the 28th anniversary yesterday of the inauguration of the Royal Thai Army headquarters on Ratchadamnoen Avenue. The military premises were the former location of the Chulachomklao Royal Military Academy, which was relocated to Nakhon Nayok. CHANAT KATANYU

During his weekly Returning Happiness to the People TV address last night, Gen Prayuth, who also heads the National Council for Peace and Order (NCPO), said that the security situation has not been fully resolved so he needs officers he trusts in the military to help him run the country.

Responding to speculation that the cabinet line-up will be dominated by the military, Gen Prayuth said he will try to ensure his cabinet also has representation from a wide cross-section of groups in society. Gen Prayuth previously said he would form his cabinet by next month.

He also vowed to remove from office any of his ministers who fail to measure up to their tasks, including those members chosen from the military.

"Let's wait and see. If they don't work, well, changes will be made. Anyone who is no good must be out. Anyone involved in corruption goes to jail. That's all. Nothing to be afraid of," Gen Prayuth said.

He said he is not affiliated with any political parties, stressing that there is no government party nor opposition party.

"Today we want to move to democracy and we have an interim charter [to reach that goal]. So don't focus on how many soldiers are in the cabinet. We can't afford to exclude the military from the cabinet since we still have security problems," he said.

He urged all sides to focus primarily on how to work for the country's best interests, rather than focus on who will be appointed to the cabinet.

"We don't want anyone to obstruct our work, but what we need is more support from the people," the premier said.

Gen Prayuth said there was criticism that he would appoint military officers who have close ties to him.

"How can I work if I don't have those I can trust," he said

The premier said he has listened to views from all sides, and that he has been flooded with hundreds of complaints and suggestions.

Several complaints have been handled in by members of the NCPO's advisory panels, Gen Prayuth said, adding that all complaints will be presented to the cabinet for consideration.

Gen Prayuth, who is also the army chief, stressed the urgent need to combat corruption which has become deeply entrenched in the country.

He said efforts to battle graft must produce tangible results within one year, adding that collaboration from all sectors is needed to achieve this goal.

Gen Prayuth placed an emphasis on spreading anti-corruption values to the wider public, stressing that legal punishments in corruption cases must be more severe and more comprehensive.

Legal amendments must be introduced to remove the statute of limitations in corruption cases so they will have no expiry date, and private companies or individuals found guilty of bribing state officials must also receive legal punishment, Gen Prayuth said.

He said procedures for state project procurement must be improved to ensure transparency, while appointments and transfers of state officials must be based on good governance principles.

Responding to criticism that an anti-corruption campaign has not been included in the 11 areas of national reform set out by the regime, Gen Prayuth said that solving corruption is the most important issue of concern and tops the list of reform proposals for the junta.

Gen Prayuth said that dealing with acts of corruption is a major and comprehensive task linked with the 11 reform areas.

The 11 areas being targeted for change are politics, law and justice, national administration, local administration, education, the economy, energy, public health and environment, mass media, social affairs, plus a special category to deal with "other issues".  Gen Prayuth stressed that anti-corruption measures must be included in all the 11 areas of reform.

He also said some local administrative organisations are in need of improvement to gain more public acceptance. He said local bodies are state units that are the closest to local people and whether the public benefits from the state depends on the efficiency of their work.