'Sin City' races NCPO to clean up its act

Pattaya officials are racing to clean up the resort's beaches and vice spots to try to shake off the "sin city" tag and prevent the military stepping in as they have done in Phuket and Hua Hin. Pattaya has a certain... how can we say... international reputation. Even the Iranian Valentine's Day bombers partied for several days in Pattaya in early 2012 before heading to Bangkok to work on their explosives and terrorism plans.

First among the targets of city officials and the new police chief are chair renters on the beach and street-walking prostitutes. Transgender sex workers claim they have already been targeted in a wave of police crackdowns.

Pol Col Suppatee Boonkrong, deputy commander of Chon Buri Provincial Police, who took over as acting head of Pattaya City Police on June 3 in the wake of the coup, said he was aiming to eradicate all prostitution.

"I want to completely change the image of Pattaya from being sin city to a friendly town that everyone can enjoy," Pol Col Suppatee told the Bangkok Post Sunday. "Safety is our number one concern and that is what we are trying to bring back to the town."

He conceded that there weren't enough police officers to tackle street prostitution so they were being assisted by police volunteers in night-time sweeps. Typically, they were sending out groups of two to four police accompanied by four to eight volunteers in vans and trucks. The volunteers have no arrest powers, but can help compile evidence by taking videos, Pol Col Suppattee said.

"I told [the police officers] that the number [of arrests] this year has to be more than last year," said Pol Col Suppatee, adding he was aiming to totally eradicate street prostitution. "This is my version of returning happiness to Pattaya town."

Thitiyanun "Doi" Nakpor, the manager of Sisters, a health counselling centre for transgenders, said police were targeting ladyboy sex workers who she had visited in custody. She claimed a police officer told her that they had been set an arrest target of 100 sex workers a night. 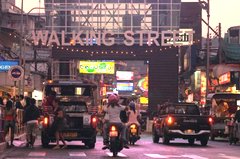 Night plight: Prostitutes in Walking Street and Beach Road are the targets of a crackdown.

Pol Col Suppatee denied there was a specific arrest target and that they were singling out transgender prostitutes.

"We are arresting anyone for whom we have evidence of trying to trade sex for money," he said. "Ladyboys happen to be the majority of people we arrest."

Pattaya City deputy mayor Ronakit Ekasingh said they were trying to "keep things under control to prevent the National Council for Peace and Order taking over the situation as they did in Phuket and Hua Hin".

Chief on the list was stopping beach chair and umbrella renters breaching rules on their allocated space of 7m by 7m, operating outside the designated hours of 7am to 6.30pm, and cooking on the beach, which is prohibited. They were also asked to remove chairs and umbrellas from the beach outside of the operating hours.

Mr Ronakit said since laws regulating the beaches came into effect in 2000 the situation had swung out of control.

"There are now 216 operators on Pattaya beach and 467 operators on Jomtien beach. None of them strictly follow our rules," Mr Ronakit told Bangkok Post Sunday.

The deputy mayor said he had sent out inspection teams to measure the deckchair plots and warn the operators along the 2.7km of beach in Pattaya.

However, the operators have reacted furiously at the officials and only the threat of the military coming in has had some impact.

"I told the teams to explain to the operators that if they don't follow the rules from the town council, the NCPO will come in to take care of the problem," Mr Ronakit said.

Dum, a beach chair operator in front of a large shopping mall, said he was tidying up his plot and strictly following the regulations.

"I am scared the NCPO will come and clean up the beach like they did to Phuket and Hua Hin. I have no back-up plan, this is the only career I have." 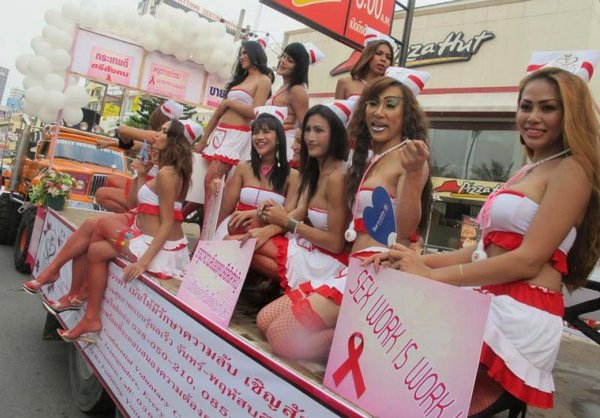 The city's transgender sex workers say police are already deeply into a crackdown that specifically targets them, apparently the opening shots in a war that pits Pattaya's thriving sex industry with plans by the junta to turn into a family destination. (Photo by Chaiyot Yongcharoenchai, Sister Center Pattaya)